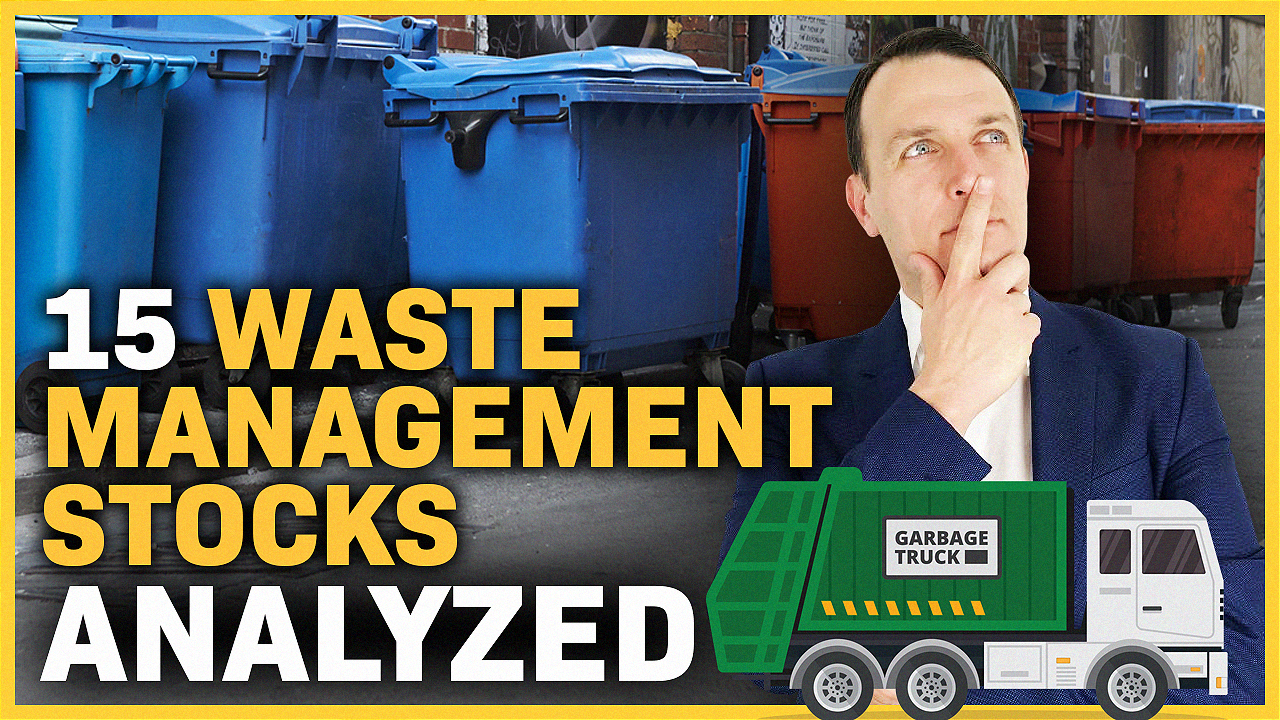 This report starts with a list of 15 waste management stocks from developed markets with links to individual analysis articles. Below the list, there is general overview of the industry, what are the key factors to look at when it comes to investing, the global trends where you can find opportunities.

If you prefer listening – here is a video running through my Waste Management Stocks Report. Stocks list and Waste management sector analysis continues below the video.

Introduction to investing into the Waste Management Stocks industry

This is a short summary of my initial thoughts and findings on Waste Management.

Did you know, the average American throws away 2.01 kg (4.43lb) of rubbish every day, or, that the total volume of Municipal Solid Waste (MSW) produced in the US, each year, is equal to the weight of 5,600 Nimitz Class aircraft carriers, 247,000 space shuttles, or 2.3m Boeing 747 jumbo jets. And, if all of the solid waste collected in the US was put in a line of average sized waste disposal trucks, that line would extend from NYC to Los Angeles, over 100 times. Also, 40% of all food in the US goes uneaten and is thrown away. (Source: Bank of America Merrill Lynch – Waste)

Well, stick with me and ‘fun’ statistics like these will be at your fingertips. Over the last few weeks, I have had to read through them all. So, I’m going to inflict a few on you. With this report, amaze and fascinate your family and friends. In fact, don’t buy them presents (too much waste) email them this report instead, as a gift!

But, for you as a value investor, let’s have another ‘fun fact’ and this time a special question. According to the World Bank, commercial fees for collecting MSW range from about $35 per year in low-income countries to $300 in high-income countries (see, fascinating). The question – Do you know why this is important and how it will make you money?

Well, congratulations, your about to find out.

Let’s start off by explaining there are many areas to waste management, recycling, circular energy production etc. Here, I am predominantly going to be talking about traditional good old-fashioned waste, rubbish, garbage, call it what you will. You know what I mean. The dirty stuff.

Why? Because, I am old fashioned and I like my rubbish old fashioned, plus, globally, only 25 percent of this type of waste is currently recovered or recycled. In other words, it’s a growth area. How do we know this?

According to The World Bank, an estimated 2.01 billion tonnes of municipal solid waste was generated in 2016, this number is expected to grow to 3.40 billion tonnes by 2050 (under a business-as-usual scenario).

The total quantity of waste generated in low-income countries is expected to increase more than three times by 2050. Currently, the East Asia and Pacific region is generating most of the world’s waste, at 23 percent, and the Middle East and North Africa region is producing the least in absolute terms, at 6 percent. By 2050, however, waste generation in Sub-Saharan Africa, South Asia, and the Middle East, North Africa regions, is expected to approximately triple, double, and double, respectively.

Current estimates for the MSW market alone are USD $410-433 billion per year. Estimates for the total global waste management market are as high as USD $1 trillion given it’s larger range (for example, industrial waste, wastewater and sewage, sustainable packaging, and e-waste).

So, lots of rubbish is being generated and needs to be dealt with. But more importantly, the world population, as a whole, is growing, increasingly it is moving into towns and cities, it is also becoming richer. The impact of this is illustrated in the next few charts:

What do these charts explain. In basic terms, amounts of waste are largely determined by: i) population size; and ii) consumption patterns, these factors are controlled by GDP per capita growth. In other words, as a population grows, so does the amount of waste it creates. As that population becomes richer, consumption also increases, again creating more waste (a 1 percent increase in national income generates a 0.69 percent rise in MSW).

Similarly, as a population becomes richer, they, in general, move into towns and cities for work. As a result, waste collection becomes more of a priority, due to space and health concerns. These same concerns usually force governments and local councils to spend more cash on waste management. Cash which they collect from the same newly rich residents. Residents who do not want to live in slums, watching their children die of disease, like in the good old days.

What Do Waste Management Trends Mean To a Value Investor?

Well, perhaps rather than focus on companies, like Amazon, who stuff products into boxes and deliver them around the world, we should be concentrating on what happens to that box once we throw it in the bin. Waste disposal means:

But, importantly, for investors, as we have already mentioned, when people become richer, they move to cities and spend more per family, they produce more waste. However, this new waste is different. It is more expensive. Those empty IPhone boxes and foil wrappers are more valuable and can be recycled. And, perhaps more importantly, because we live in cities and put out our rubbish for disposal, waste becomes easier to collect, things can be done more efficiently, economies of scale kick in, larger companies take over responsibility, it’s easier to get customers to pay up as they have bank accounts and best of all, as they are richer you can force them to pay more for their waste collection.

Waste management, done well, can create a business environment with a large moat, that has constant demand for its products and the ability to charge customers higher prices for the same thing year in year out.

The Downside of investing into Waste Management Stocks

That all sounds great, a licence to print money. But there is always a downside or a voice of caution. Here are a few issues:

Going forward, in line with many other sectors we have previously researched, analysts anticipate a two-tier growth story within MSW:

Many developed markets, particularly in Europe, face structural changes in the waste business coupled with lower waste volumes and a shift, in what is called, ‘the waste treatment mix’ (more recycling, less landfilling/incineration). These changes will hit margins.

The EM MSW market is expanding fastest on the back of: a sense of urgency due to climate change and population growth, the need for a waste solution and profit opportunities created from increased regulation, increasing barriers to market entry, caused by economies of scale, new regulations etc. But in many places these changes have yet to take place, at least in a way that global retail investors can exploit. That said, analysts consider Asia and Latin America to be the most attractive regions, with China and Brazil the biggest growth markets.

So, I have been doing some searching through all the rubbish (I couldn’t resist that joke) and I have researched through a number of companies, around 30 or so. A large number belong in developed markets and are a US or European listed company. They are mostly the largest waste managers globally. Some feature in one of the few ETFs specifically designed to cover waste investing, or, were uncovered, in the natural cause of events, by myself, whilst carrying out my research. All are considered, by analysts, to have a high exposure to the waste management sector. To find the analysis of 15 waste management stocks from developed markets just scroll back to the beginning of this article.

Those who want to learn more about stock market investing can join the Free Comprehensive Stock Market Investing Course.