Nassim Taleb just had an interview on Bloomberg discussing the latest topics in finance: 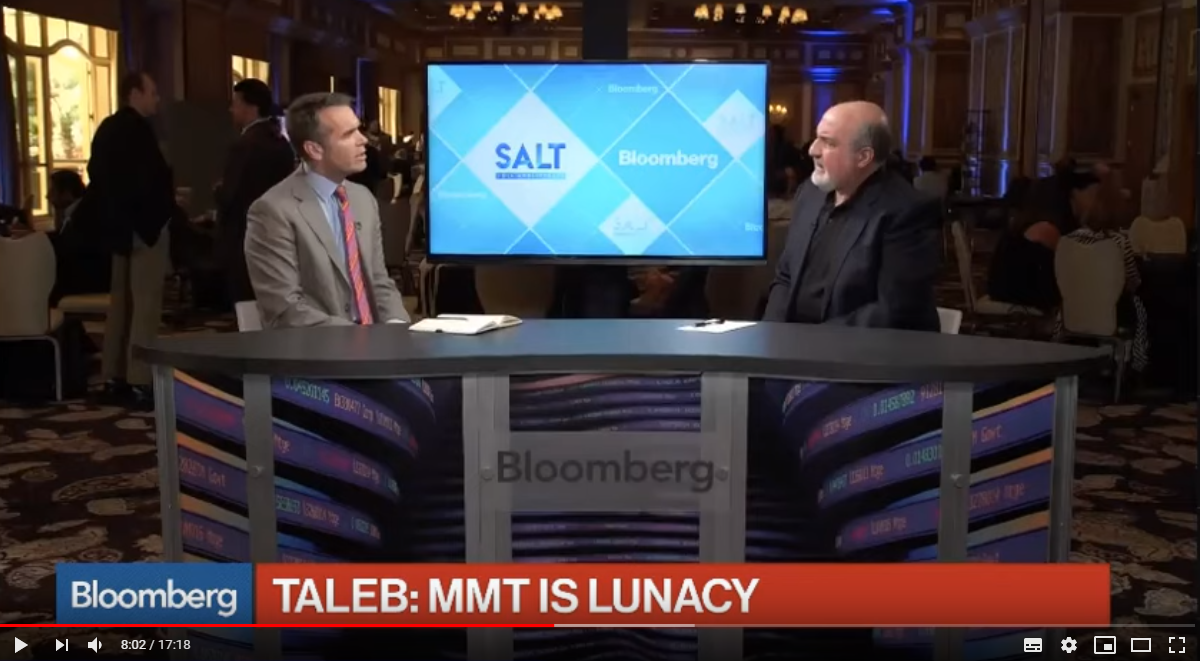 It is a great interview but as often with such interviews, things are not explained in depth. I’ll try to add facts to Taleb’s thinking and you will see how that affects your investing!

Let’s start with deficits, from the Wall Street Journal: 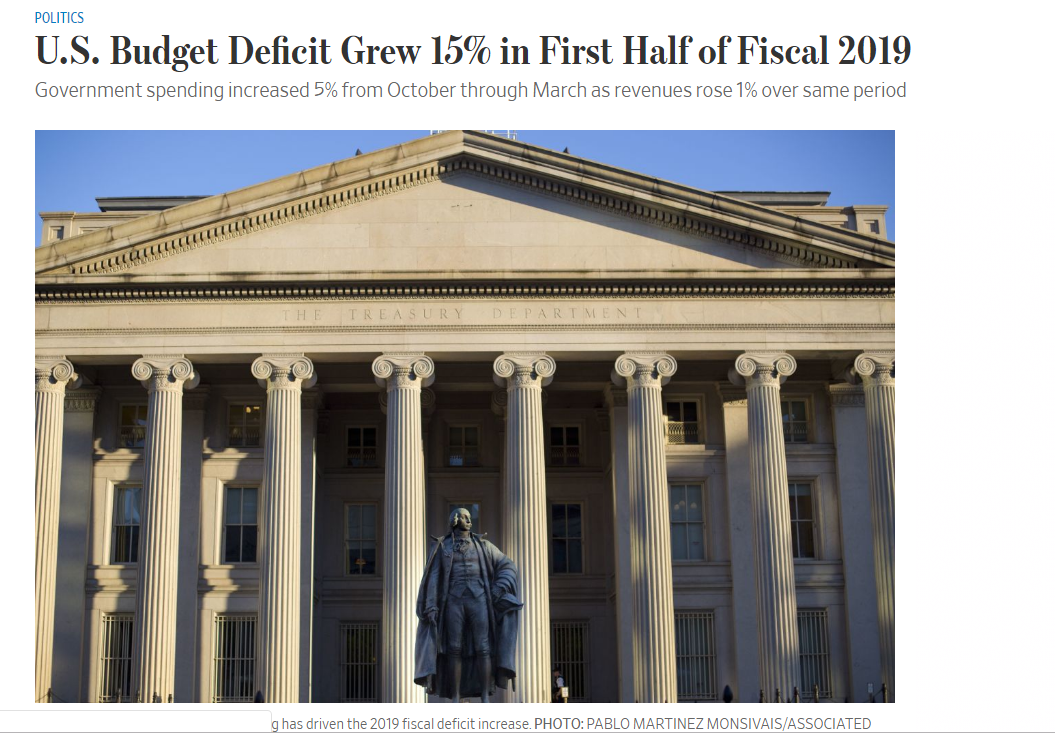 In an environment with full employment, thus with the economy doing great, budged deficits are increasing! 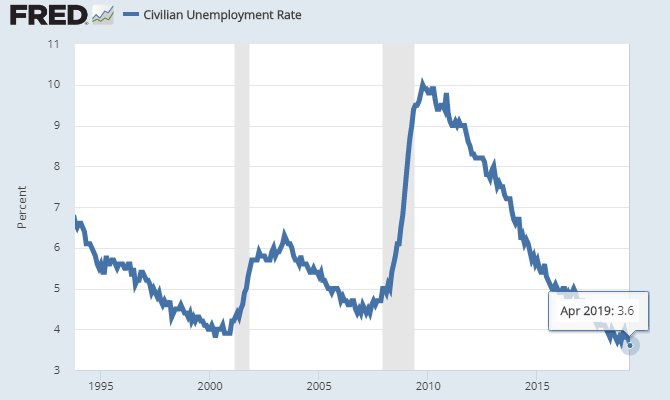 With a strong economy, the logical thing should be to have budget surpluses so that when a recession or slowdown eventually comes, you have the room to increase government spending. If you check below, during the late 1990s, the budget had surpluses but it seems now most politicians think that debt is something not to worry about now. 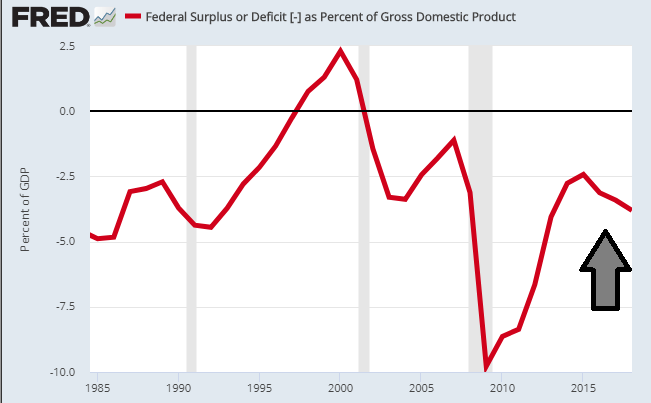 Accumulating deficits mean higher government debt. Total public debt in the US had doubled in the last 10 years, DOUBLED. 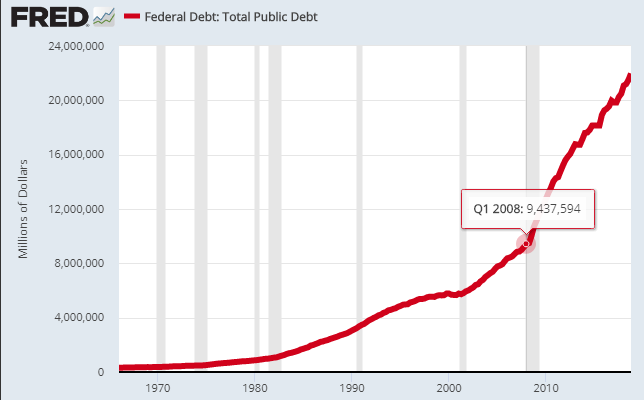 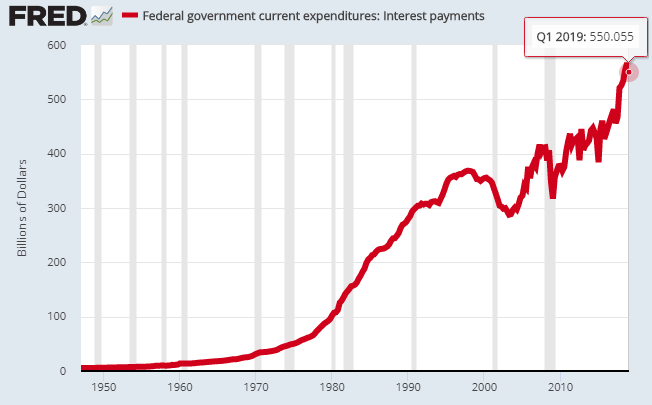 The US government has to pay $550 billion in interest per year, and to do that, it simply borrows more as the deficits are now at almost $800 billion and expected to hit $1 trillion soon. 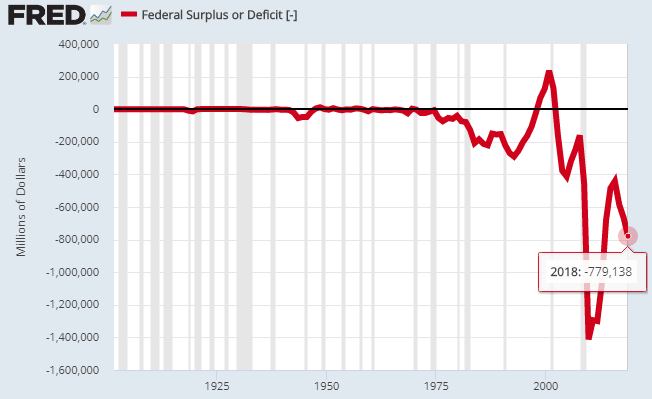 Such a situation is unsustainable and for Taleb, and probably for every other rational being, a huge risk that is piling up and will at some point in time blow up. If you borrow just to pay interest on your debt, you are close to a Ponzi scheme and we know how those things usually end up.

In the next recession, budget deficits will explode that will probably increase the borrowing rate and create a spiral of trouble as raising rates will cripple debt servicing. To solve such issues, government tend to print more money and you soon have hyperinflation.

Further, if you increase interest rates, the cost of debt for the government exacerbates. So, a normal option to cool the economy is something the FED can’t use at this point in time. 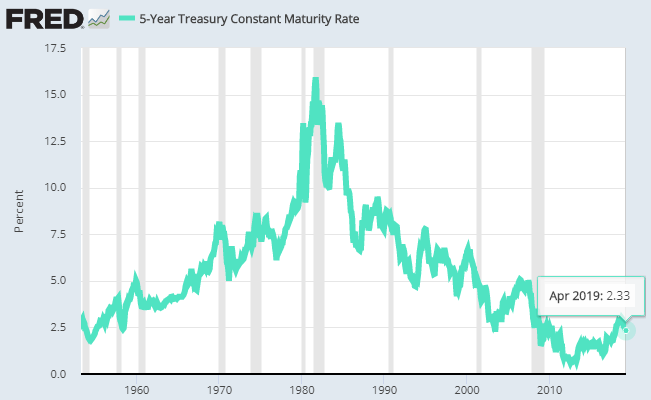 A longer term increase in rates where the US borrowing cost go to 5%, where those were in 2007, would double interest payments on the debt, further increasing budget deficits.

The plausible solution to the above problems creates another huge risk.

We recently discussed Ray Dalio’s views on the plausible next monetary policy moves that involve helicopter money and a coordination between government spending and money printing. Taleb is against such things because of the risks that pile up where the main risk is hyperinflation.

Even if inflation has been really low over the past years and contained between 1.5% and 2.5%, Taleb mentions how inflation doesn’t work linearly and how just because it hasn’t materialized, it doesn’t mean the risk isn’t there. 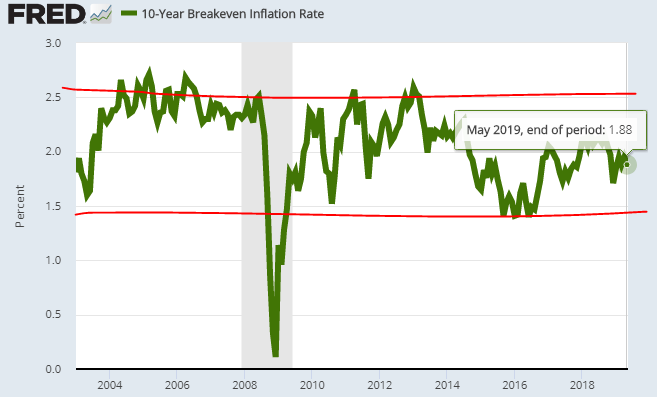 At some point inflation will ramp up, that will make things not manageable; think of Venezuela, Argentina, Zimbabwe. Taleb really agrees with Charlie Munger on this issue.

On market risk, Taleb discusses how people should not even own equities and should focus on their jobs as source of income and invest only for capital protection. He says that if you must hold equities, you have to do that and be hedged in a proper way against long tail risks. The problem is that few know how to do that, i.e. buying some puts is not the strategy because of the large cost attached to it.

But, he is clear that what is going on will at some point crash and that we should be ready for it. He also says that if there is a crisis, he will be the first to buy.

On how to invest, he advises to avoid the middle, thus the zone where most people invest chasing income and yield and how you should invest in a barbell way where you hold most of your money in safe, wealth protective assets where he excludes equity and especially bonds.

He mentions how public pensions funds need to hedge properly because if not those are doomed as they promise 7% returns and a crash would require them to reach much higher returns in the long term.

His message is that if you don’t know how to hedge for tail risk protection, you should not hold equities.

He owns some gold, land, some other financial instruments(derivatives) and avoids stocks, long term bonds – hold short term. Tail risk hedging if you know how to do it.

Morale of the story, risks are piling in the form of higher debts, hyperinflation is the probable solution and one should be hedged against tail risks. More about what are tail risks and how to possibly hedge, if we can do that in future videos.

Oh, on the hot topic, I almost forgot, Taleb says how he loves to chat about things that took him 20 years of thinking to get to have something to say, so he really has nothing to say on trade wars, next year there will be something else people will chit chat about.