I’ve been looking at my screens and, apart from solar stocks, another sector deep in the red has been Brazil. I made such nice returns in 2016 and 2017 from Brazilian stocks that when I see all that red, I start to smile again as opportunity knocks. I hope to share with you the strategy that produced the returns I had enjoyed. One example:

Figure 1 My articles on SA on CEMIG – “Be greedy when others are fearful.” 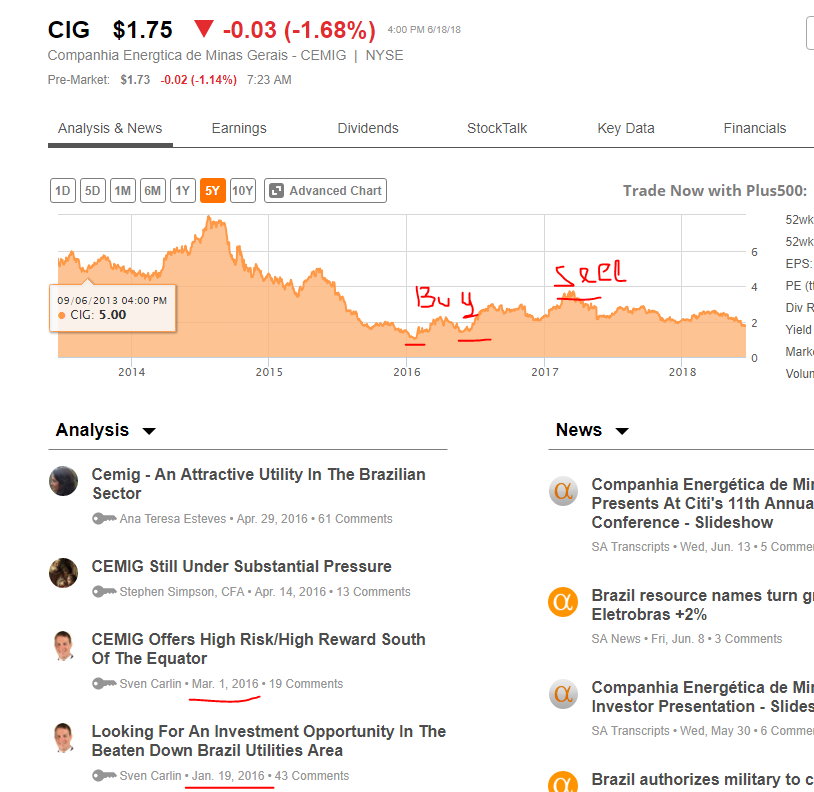 It is time to take another look at what is going on in Brazil, what the investment opportunities are and what the best investment strategy to minimize risk and maximize returns is.

Following the FED’s interest rate hikes, the first cracks started showing up in emerging markets. Countries and companies that are burdened with U.S. denominated debt, but book revenues in their weakening domestic currencies, are squeezed by the two headwinds.

Take a look at how volatile the Brazilian ETF has been. It was a 15-bagger from 2002 to 2008, only to drop 70% in the final year of that bull run. There was another bull run in 2009, followed by a long decline that ended in January, 2016. Since then the Brazilian stock market boomed again, only to drop 30% over the last six months.

I don’t know where the bottom of the current decline will be. The only option we have is to look at the fundamentals of possible investments and their relation to what is going on in Brazil. This leads to finding out their risk versus reward and intrinsic values. The goal is to find a good business that we can feel confident about averaging into if necessary.

There are two ways to look at an economy. One is to follow the headlines that are spreading panic or enthusiasm, depending on what appears to sell and lead to clicks. The other is to take a deep dive into  key indicators and long-term trends. Let’s start by discussing the news.

The Brazilian general elections are coming this October and the Central bank has been having issues trying to keep the Real stable. 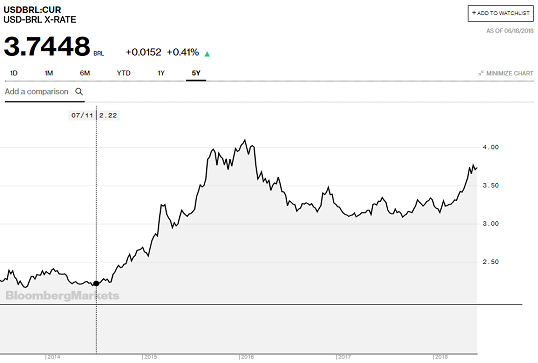 Versus the dollar, the Brazilian currency depreciated 50% from mid-2014 to January 2016, then stabilized for about two years. As it became clear that interest rates would continue to rise, the Real has lost ground again during 2018. Currency volatility has a significant impact on our investment returns and has to be watched carefully.

The Brazilian currency has been weakening due to the current emerging market sell-off that usually creates a selling spiral because nobody can see a bottom; thus the trend is self-reinforcing. Further, the weaker currency leads to lower economic expectations that, in combination with shallow financial markets, creates an extremely volatile environment. And, as we know, markets do not like volatility and uncertainty.

The Brazilian Central Bank is protecting the currency with foreign exchange swaps and has offered $26 billion in the previous week. As always, investors wonder how long the Central Bank will be able to do that.

The above, in combination with a truckers’ strike that brought to a weekly transportation stop in the whole country during May 2018, has led many economists to cut their growth expectation for the remainder of the year. 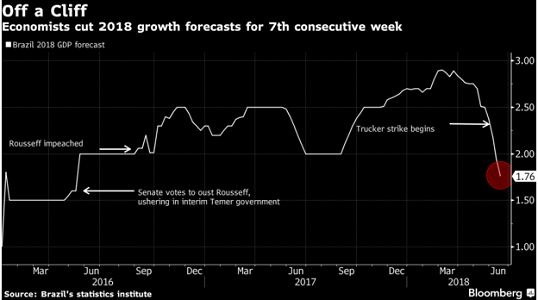 Regarding the elections, markets hate, which is exactly what we have. The leader in the polls is the jailed former president, Lula.  Without him, the highest number of votes would go to a right-wing candidate. Regardless, there is no clear outcome. 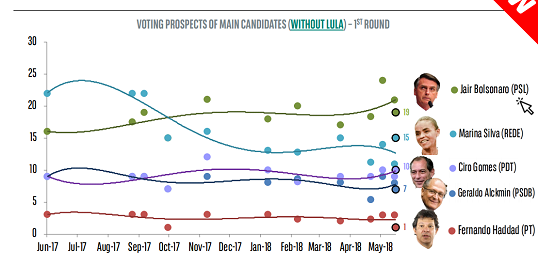 Because nobody knows what will happen, I like to make my investment analyses as if the worse will happen. This means that economic growth stagnates (perhaps to the point of recession), the currency loses another 25% of its value and then next political leader is from a business-unfriendly party. If I find a stock that would still deliver a nice business return, perhaps even a dividend, in such an environment, then I have a strong buy. Before digging into stock analyses, let’s evaluate the long term economic perspective.

It is very easy to lose sight of what is important when there is so much news about things that don’t matter.  The important thing is that life in emerging markets goes on no matter what, gets better year by year and people continue to live as always (except for Venezuela). Plus, people in emerging markets are much more used to volatility than people in developed economies.  Let me show you a few charts.

Despite the Brazilian stock market still being 65% below its 2008 peak, things have improved there during the last 10 years. For example, households’ internet access went from 23% to 70% and is still increasing. 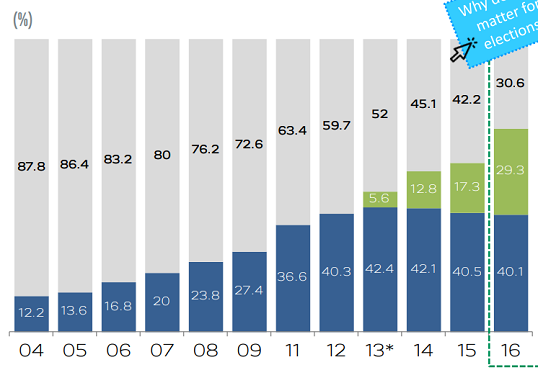 An indicator I like even more is energy consumption. It shows how the real economy is developing independent of the temporary economic swings and market sentiment. 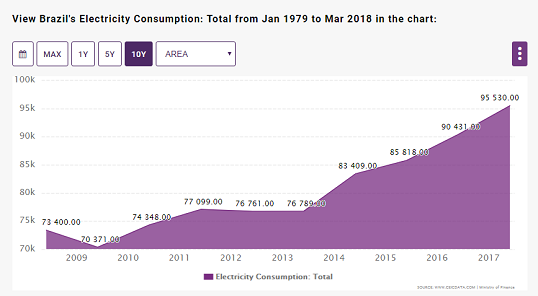 Let’s evaluate investing opportunities while keeping in mind the volatility and possibility of extreme negative sentiment that can hit such markets.

The Brazil ETF (EWZ) already has better than average fundamentals, but it is important evaluate its holdings.

The stocks are dividend into those directly traded on the NYSE or NASDAQ and on OTCPK.

Check the cost of owning an OTCPK traded listing. I will also look at those for better specific sector analyses within Brazil.

Both tables are downloadable on my Research Platform.

My next step is to readjust all my earnings models for the stocks I have covered in the past and to analyze the other stocks from a risk-reward perspective. There are 79 stocks to evaluate.   If we find one, I’m happy; two would be a miracle.

The investment strategy that has worked in the past was to find companies that will continue to grow business no matter what, find their average future earnings, and invest when the business return appears satisfying.  Find investments where you can continue to invest if the stock drops to average down.

You can find the detailed analyses on my selected stock picks on my Research Platform.