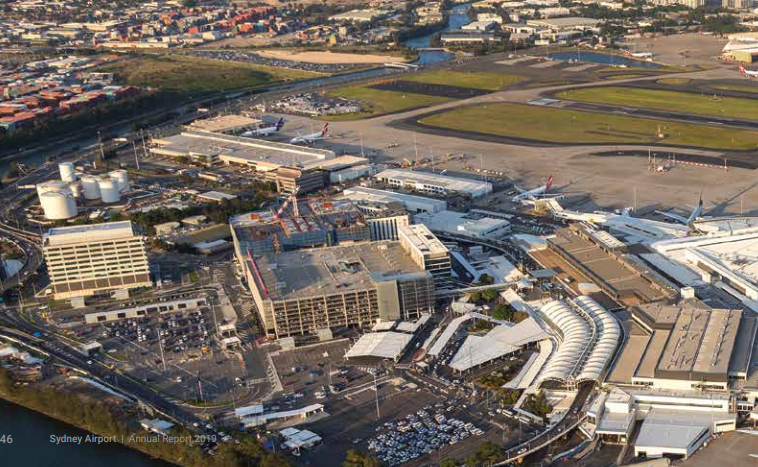 I continue with my analyses of airport stocks so don’t forget to check the full airport stock analysis list here.

Sydney Airport stock price had a huge run up prior to Covid-19 while now it is back to 2016 levels. Until the late 1990s airports were usually government monopolies and not private. Only over the last two decades more and more airports were privatized and the market noticed them only over the last 5 to 7 years. Low interest rates made their dividends more and more attractive while global air traffic growth of 5% made their earnings much higher. Consequently, Sydney Airport stock increased more than 10 times since 2003 and paid good dividends in the mean-time. The COVID-19 came but this shows its investing potential.

Sydney Airport stock is traded on the ASX with ticker: SYD

OTC in North America as SYDDF but with very little volume.

Sydney Airport Stapled Securities is a complex structure but SAT 1 has given SAL a loan and the benefits of doing it that way are approximately AUD 200 million per year up to 2022 thanks to tax reasons.

What is very important when it comes to investing in airports is the concession. Sydney Airport concession last up to 2097 which is much longer than other airports that we discussed have and we surely don’t have to worry about anything here.

What will happen to Sydney’s Airport stock price in the future highly depends on when will things normalize in the industry but this doesn’t mean we can’t analyze the investment risk and reward based on possible scenarios. Global economic growth will be hit hard and the consequences will be felt for a while. The IATA projects a full recovery of air traffic to pre-COVID-19 levels by 2024.

Depending on the form of the recovery, the key with Sydney Airport is the debt/liquidity game in order to see how much is it going to cost shareholders until times get better. Hopefully 2022 will already be like 2016 which includes profitability.

Let’s take a look at the business, the fundamentals and then the outlook on the dividend and possible investment returns.

Like most airports, Sydney’s Airport revenues come from a variety of sources; aeronautical, retail, property and parking.

As traffic growth, the company has been constantly investing to improve the quality and capacity of the airport.

Prior to COVID-19 the annual investments were around AUD 400 million. This has been scaled down now but will likely resume when things return to normalcy.

Their growth will likely continue to come as Asia develops but they target other areas for growth too; South and South East Asia, Africa and South America.

As economies develop, it is likely there will be more air traffic too but I don’t know if it will impact Sydney Airport as it was the case over the last 20 years where there was a significant boost coming from China.

Perhaps a better idea for African traffic growth potential coming from improved living conditions and a growing population is Aeroports de Paris stock given that France has the strongest connections to Africa.

It is important to note here that Sydney doesn’t have the capacity for a new runway so all the growth must come for larger planes which should not be an issue or more planes in off-peak time slots. Further, the nice things about airports is that you have a monopoly, but the government has announced that it will allow for a new airport to be built, the Western Sydney Airport. Also, the new airport will not have a night-time curfew, as the existing Sydney Airport now does.

On the more specific growth targets, like any other airport, they will try to use the land available in the best way possible. The Jet Base expire will allow for new land to be developed in a more profitable way.

When things normalize, I would assume slow traffic growth ahead that should lead to middle or high single digit earnings and distribution growth over the long-term. Apart from COVID-19, the main risks for Sydney Airport are the development of the new airport, the high debt levels and normal business recessions that might hit Australia or Asia.

Let’s take a look at the fundamentals.

In one word, the current situation could be described as terrible as revenues are down more than 90% in Covid-19 hit months.

The good news is that recovery levels for China have been staggering and one could hope thing across the globe might be somewhat similar in the future.

I’ll start the analysis by discussing using 2019 as a benchmark year for what to expect long-term and then adjust for the impact of COVID-19, the debt and the latest equity issue.

In 2019 traffic growth was just 0.1% but the airport still managed to increase EBITDA and the distribution by 4%. All in all, it looks like a normal airport business that has high margins and high profitability as the more passengers, the higher are the revenues but the expenses grow at a much slower pace. Sydney Airport even managed to lower expenses in 2019.

Revenues (1 on below table) didn’t grow as fast as it was the case with Auckland Airport but there has been growth. Going forward and given the expansion limits we can expect some growth but not that much. Dividends (2) have doubled over the past 10 years, the number of shares outstanding (3) has increased significantly and will hit 2.8 billion when adjusted for the new equity raise (not shown below). Book value (4) is negative which shows the managements aggressiveness in rewarding shareholders and growing by using debt. But, in a normal environment the cash flows (5) are staggering!

Despite the good cash flows, the debt can’t be overlooked!

In prior presentations, the management always said how they have a strong balance sheet. But I would argue about that because the debt was 5.3 times revenue in 2019. Thus, what is clear is that the company used cheap debt to finance growth while at the same time was paying a hefty distribution to shareholders. Such a strategy led to negative equity but a growing stock price. With negative equity you are betting you will always have cash flows to cover for business needs.

This is the core difference between Buffett style long-term financial fortress investing and most others.

Sydney Airport has been rewarding shareholders with a strong and growing dividend over the past years but at the same time growing its debt pile.

As soon as a crisis came, they went for an equity raise asking shareholders for money as it was clear their debt ratios were stretched. When a company boasts its ability to get into debt, you must treat it as a short-term trade because debt will improve the fundamentals over the short-term but backfire over the long-term. Given the above, there will be no distribution for 2020.

The debt maturity profile also puts a lot of pressure on the company in the short term if traffic doesn’t pick up significantly. I wouldn’t worry that much about refinancing opportunities as much as about the costs of doing so. Interest rates are extremely low at the moment but that can change anytime, especially in Australia.

The above debt issue takes advantage of low interest rates which is good but the long-term horizon tells us they never plan to pay this back. This is smart strategy because as the business grows, inflation allows for higher prices, long-term debt with fixed interest rates becomes a smaller and smaller issue. Until a crisis comes and all backfires. Thus, Sydney Airport stock is a clear example of higher risk through leverage that when things go well leads to higher rewards, but also to the opposite when things turn south.

As there is no business, they decided to ask shareholders for money with what they call an entitlement offer with a discount to the trading price.

Given the stock is already trading above the issue price, it has been a good deal for those shareholders that had the money to participate. The proceeds were used to lower debt maturities and other corporate needs. But the fact that you raise equity to cover debt shows the tricky is the position they are in.

Given the high margins the airport has, one shouldn’t be concerned about Sydney airport remaining a going concern even if it lasts a few years to recover. However, the debt makes things trickier because of the negative equity.

Given this is an airport and once you build the runway and facilities and those are there, you can enjoy the high profits that grow as traffic increases. Sydney airport invested AUD 5 billion since 2002 and now it can enjoy the returns on that investment.

So, there are high cash flows coming in and as investors we have to look at what is the cash flow available to the shareholder, that is the actual value created.

In 2019, the distribution was AUD 880 million in total. Operating receipts were AUD 905 million and EBITDA was 1.33 billion. The yearly capital expenditures are around 300 million and it is something I’ll expect to remain so over the long-term.

On the AUD 9 billion in debt with an average 3% interest rates one should account for another 270 million in interest costs.

So, in a normal year like 2019 they make 1.37 billion in cash flows from which we have to deduct 300 million for investments and 300 million for interest plus taxes that are relatively low due to the high depreciation charge but let’s put 100 million. All int all, the value created for shareholders is approximately 670 million AUD. The 200 million difference between the value created and the distribution can be attributed to a debt increase. Plus, by 2022 their 200 million benefit of having intercompany loans will end.

If 670 million is a base we can expect over the long-term, it gives a 4.75% return on the current market cap of 14.9 billion. Given that the airport will likely grow at a similar rate to other global airports, Sydney Airport is still among the most expensive airports out there no matter the recent 50% decline in the stock price.

If you approach this from an owner’s perspective, you see an earnings yield of 4.75%, a growth rate of let’s say 3% over the long-term as other crises will come for sure, and you have a great return of approximately 8%. That is not bad, especially when compared to interest rates in Australia.

You have to see how investing in Sydney airport fits your portfolio from an owner’s perspective.

From a speculative perspective, it is likely that when the distribution is resumed, the traffic starts growing again, the market might value the company as it did before the crisis and put the required earnings yield to 2.5% which would imply a 100% increase in the stock price.

Many European airport stocks are in the same situation as Sydney and those offer much higher business returns alongside equal debt levels and likely growth rates so you might want to check those to and compare them to Sydney Airport.

If you enjoyed this analysis, please subscribe to my newsletter.