This Ferrovial stock analysis is part of my global airports stocks list with detailed stock by stock analyses.

Ferrovial’s stock price has been extremely cyclical over the last decades with a low around 3 EUR in 2009 and a high of 30 EUR just before the COVID-19 crisis. However, Ferrovial’s business isn’t entirely cyclical as it owns toll roads, a 25% stake in Heathrow airport and a purely short cycle business, i.e. construction.

Also, don’t get fooled by the sky-high price to earnings ratio of 66 above, it is just an accounting issue. Ferrovial is a company that owns stakes in other companies and when you don’t own more than 50% of a company, you don’t consolidate its results, you just account through the equity method which distorts the results. More about that in the fundamental analysis. It is a similar situation to Berkshire and you can read more about that in my Berkshire Hathaway Intrinsic Value analysis where I discuss BRK’s hidden earnings.

Most of the ownership is in free float, but the founder’s family, Rafael del Pino’s, is still in the management of the company and owns 20% of it.

This Ferrovial stock analysis consists of:

The company has the following divisions:

The main contributor to the business are toll roads, then airports and the smallest contribution comes from construction and services.

The main owned toll roads, through Ferrovial’s subsidiary Cintra, are the 407 ETR in Canada and the LBJ Expressway, North Tarrant Express (Dallas) and NTE Extension, 15% stake in the Autopista del Sol, roads in Portugal, 20% stake in motorways in Ireland.

All in all, Ferrovial is a well-diversified infrastructure operating business with very long concession terms, up to 2098 for the 407 ETR road and up to 2061 for the Texas roads. Thus, the investing analysis can be based on the fundamentals and cash flows.

Revenues have been declining over the past decade, but that is most due to asset sales.

The basis to value any business are the cash flows. With Ferrovial, cash flows mostly come in the form of dividends from the owned stakes in the above-mentioned assets. The company is constantly investing in new projects, so it is not really a cash cow, but we can value it based on the current cash flows and best to do that through the dividends and buybacks.

The number of shares has declined from 891 million in 2010 to 730 million in 2019 which gives a benefit to shareholders and increases further earnings. One could argue that buybacks are only good when the stock price is low, but we will not enter this discussion now.

Just based on the dividends received, not counting the earnings of the subsidiaries and owned assets, Ferrovial’s price to earnings ratio would be 24.5.

The reward distributed to shareholders is 520 million, likely to grow over time as the company works on its construction projects and increases the number of assets owned.

The management has been very active over the past decades with acquisitions and sales, so we can’t expect linearity going forward but we have to work with what we can work.

Their value creation, based on the company’s cash flows, should be the following; they invest approximately 250 million per year in their investment project and they pay-out 520 million to shareholders through dividends and buybacks.

Their average return on capital employed over the last 10 years has been around 4%, as it is all mostly leveraged by 80%, given the company’s balance sheet, if I apply such a reward to the 200 million reinvested each year, the returns should be 20%, but let’s put a conservative 10% given the current environment. So, we could add 25 million per year to the cash flows for shareholders per year that would give us a growth rate of 5% (25 million on 520 million).

Thus, if we expect the company to continue to pay dividends of 520 million giving investors a 3% dividend, plus 5% dividend growth that usually gives a 5% stock price increase if valuations remain the same, and if we add a 1% inflation contribution, we get to a potential shareholder return of 10% over the long-term.

But, that should be it from Ferrovial stock and it all also depends on where the stock price is. At the current market capitalization, the return in a good year should be 10%, but we know there will be both good and bad years ahead, which makes a 10% return unlikely for this cyclical, slow growth stock. 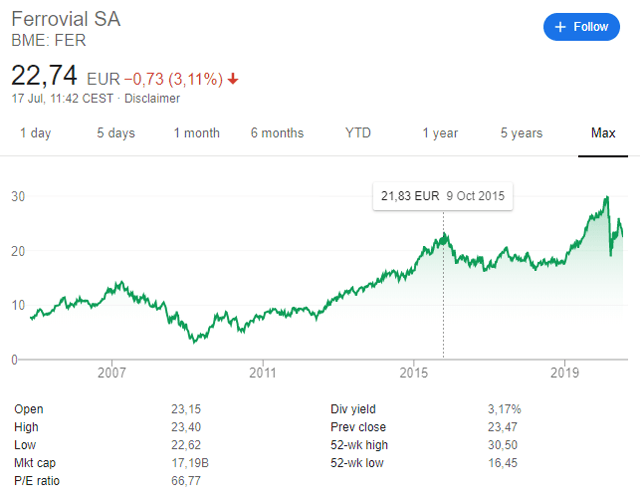 I would argue that investors, from the current level, can expect a long-term investing return between 5 and 10% per year, likely closer to 5% from Ferrovial. Nothing bad, and actually a good return for their quality assets. However, not really what I am aiming for.

The Ferrovial Stock Analysis is part of my Airport stocks analysis made by Sven Carlin for the Sven Carlin Stock Market Research Platform.

I love to research businesses and the respective stocks. My goal is to research a few hundred of them each year and then hopefully find a few good investments. The only way to do that is to turn as many stones as possible and follow the interesting businesses closely. I am happy to share the research process here and I hope you enjoyed this and the other stock analyses published here.

If you wish to receive such analyses to your inbox, please subscribe to my newsletter: