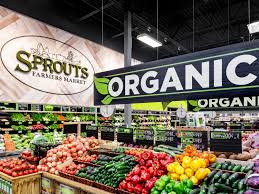 Sprouts Farmers Market stock (NASDAQ: SFM) has been in a downward trend since its IPO in 2013.

Despite the negative stock performance since the IPO, Sprouts Farmers has more than doubled revenues (1), quintupled net income (2), lowered the number of shares outstanding (3) from 154 million to the current 118 million by returning $958 million trough buybacks since the IPO and the current fundamentals look interesting compared to the market capitalization of $2.3 billion. The market capitalization was $7.3 billion when the stock peaked in 2013.

SFM went public when organic/natural food stores were dominating the environment regarding growth. You probably remember the buzz around Whole Foods and Amazon consequently acquiring it. But, like it often happens with growth sectors, it is hard to define who has a moat, the profitability and growth opportunity leads to a high level of competition with consequently narrowing margins.

This explains the market’s sentiment regarding SFM’s stock, but another thing with SFM is that gross margins actually expanded over the years, operating margins declined. On the other hand, most analysts fear how SFM will not be able to compete as mainstream retailers like Kroger, Wal-Mart, Target and others introduce more and more of SFM’s like products, from organic to specialty, into their stores.

The key to watch with SFM’s stock is the investing opportunity that often arises when a stock transitions from an exuberant growth stock into a boring value investment. Given the metrics to watch are different, growth investors capitulate and create downward price pressure while value investors are not yet around to pick up what is left. Plus, it is also important to watch whether the analysts’ fears become reality because analysts usually paint a whole sector with the same brush.

Let’s discuss the business outlook, the fundamentals and the investing outlook through a value stock analysis model.

If you are not familiar with SFM, it is something like the cheaper version of Whole Foods, offering premium, healthy, organic and specialty foods to customers. The management calls the company a specialty differentiated retailer.

The main idea is that produce is in the center of the store surrounded by premium products.

Given the narrowing margins over the last years, there has been a management transition at Sprouts Farmers Market and the new growth strategy is to have smaller stores for higher profitability, more growth in existing markets rather than pure geographical expansion where it is hard to scale and reach cost benefits.

Despite the bad stock performance, SFM is still focused on growth and executing on it.

The concentration should lower logistics costs and give more pricing bargaining power, increase the efficiency of ads and allow for better margins.

Apart form the above mentioned business overview, there are interesting business developments like:

But, the key thing on a conference call are the questions because those give you an indication of the issues and what the analysts/market are thinking:

SFM is definitely not doing things as analysts would want them to do things. In the mean-time free cash flows are increasing, revenues too and the company is better and better positioned albeit with declining operating margins and not expanding margins at the same rate as the competition did in 2020.

If they can grow at 10%, lower costs, increase comparable sales in stores, then margins will expand, so will profits and consequently the stock too.

The key is to watch whether margins will start expanding or keep narrowing as analysts fear, and as has been the case with operating margins over the past years, excluding the COVID-19 positive impact. The narrowing of operating margins is what created the pressure on the stock, alongside the fear of increasing competition from Amazon through Whole Foods and online, To Wal-Mart, Kroger and others having more and more specialty and organic offerings to hard discounters doing the same.

2020 has been really good with operating cash flows of $410 million for the 3 reported quarters, investments of $76 million and the remaining cash has been used to pay down $176 million of outstanding debt.

The forecasted earnings in 2021 before interest and taxes are expected to be in the range of $285 million to $305 million. With $100 million in depreciation, excluding capitalized leases, we get to approximately $400 million in EBITDA which means the company could be attractive for buyers at 7 times EV/EBITDA.

From that perspective SFM stock looks cheap as Apollo paid 6.9x EV/EBITDA for The Fresh Market in 2016, Onyx 7x for Save-A-Lot, Amazon 11x for Whole Foods for example. On the other hand, Goldman has just downgraded the stock on the following:

Let’s value the company from a risk and reward perspective alongside a possible margin of safety.

SFM is a small but established player and it is always valuable for someone to acquire it if things don’t go as planned so there is a margin of safety. Someone will buy this up fast if on the market and if the current interest rate environment remains. Total debt is $540 million and not much compared to cash flows.

Let’s say they manage to double the business in 7 years. That would be $400 million in FCF without improvements on operating margins. On the current market capitalization of $2.4 billion it would give a 15% FCF yield. Even if they just keep the FCF on the pre-COVID level of $200 million, thus they don’t improve margins, they would still give an 8% FCF. If they do buybacks at lower prices – the stock could be up to the $30s over the coming years for a good return.

In my valuation model I use the cash flows that I assume will be returned to shareholders through buybacks over the next 10 years, as it was the case in the last decade and assumed a 7% earnings growth alongside a 50% increase in buybacks in 2026 when the expansion plans slow down. With a very conservative multiple of 15 on disposable cash flows in 2030, I get to SFM being fairly valued for a 10% long-term return if they manage to keep margins stable and execute well on their plans.

Shorter term, yes, if they can keep growing and get to a free cash flow yield of 20 on the $200 million in free cash flows – then the stock can easily double.

The key risk and what everyone is watching are operating margins. If margins keep declining, like it has been the case since 2014, down to 4% from 8%, then the outlook will not be great.

However, if they can stop operating margin contraction with the new initiatives, and perhaps even grow it given the gross margin expansion, things could get really interesting.

It will all depend on the environment, demand, the competition, the growth and execution with online sales that make 11% for now but are margin diluting.

All in all, we have a company trading at $2.3 billion that makes approximately $200 million in FCF in a normal year, is rewarding shareholders through buybacks and offers growth potential. It is in a resilient industry and the trend is still growing for organics with a 6.3% growth rate in 2019 according to OTA.

In my opinion, the most likely thing is an increase of the stock price to $30. In the worst case scenario I think the stock could fall to around $12 where it would likely be taken over by somebody for $15 or $20. Thus, the investing opportunity regarding SFM stock is currently giving a positive risk and reward situation.

For me personally, SFM doesn’t offer a safe 10% long term return and therefore I haven’t added it to any of my portfolios but I will be watching it and consider adding when its expected return is in the teens and the margins are confirmed to be stable.

If you like my approach to investing and valuing companies, please consider subscribing or check my Stock Market Research Platform.