Ryanair Stock Analysis – When Is This Stock A Buy?

I’ve been marginally following Ryanair for a few years now. When a CEO states:

“If someone wanted to pay £5 to go to the toilet, I’d carry them myself. I would wipe their bums for a fiver.” 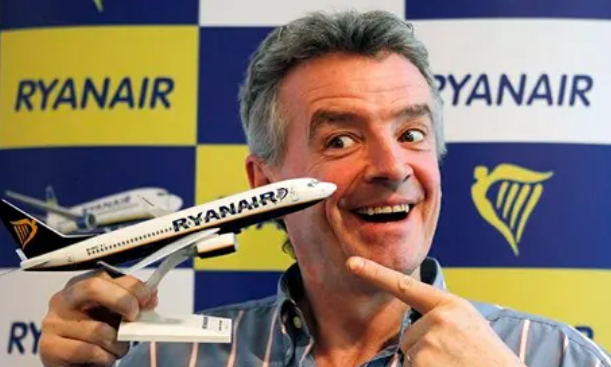 It means that he is dedicated to the business. Nevertheless, I always look at risk versus reward and Ryanair was always a bit too expensive for me in the past. Over the past months however, the stock is down significantly and it is time to do a deep research into the business, to see whether it is undervalued and a good investment, or the business model is not strong enough to mark it a long-term investment opportunity. We know airlines are not renowned for being the best businesses in the world but you never know, Buffett bought 4 of them a few years ago. 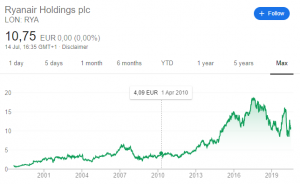 2020 COVID-19 Update: Buffett sold his airlines because the business is too risky, plus, you can’t really have a moat as the barriers to entry are small. With that line of though, I have been researching airport stocks, that offer a moat, have high margins and give a similar, if not better exposure to the global air traffic growth trend.

To value Ryanair, we have to look at:

The recent news on Ryanair has been mostly negative

The news has been bad over the last two years for Ryanair:

All of the above shows how the airline industry is tough, something we’ll discuss in a moment.

The same issues forced Ryanair to lower prices as the average ticket sold fell from EUR 39 to 37 and consequently net income fell to 1 billion. However, the sky isn’t that dark.

Ryanair’s CEO clearly states that the fare environment will be weak going ahead. But things are not all bad. There have been some bankruptcies in Europe over the last years which allows Ryanair to grow and get more slots. It is expected that there will be more divestments and perhaps other opportunities for Ryanair to scale as it recently did by acquiring Lauda for 50 million EUR and further investments. Now that the company is unionized and both a Boing and Airbus operator, it can participate in consolidations.

Another positive will be the delivery of newer Boing 737Max planes with 4% more seats and 16% better fuel efficiency. Over the coming years, Ryanair plans to sell its older aircrafts, 10 of the oldest will be sold for 170 million as soon as they get the new aircrafts.

From listening to the conference call, I must say the management is very opportunistic. Something you don’t hear much when listening to calls. They recently took 750 million of unsecured debt at very low rates and they prefer to lease 7 to 9-year-old planes for less than $200k per month rather than to acquire new planes. On new aircraft prices, the CEO says how the pricing is high and order books are full and how they’d rather wait for the pricing cycle to weaken. This is a very important thing to hear for Boeing or Airbus investors.

It is interesting how Ryanair switched from dividends to buybacks, perhaps again opportunistically, and how they have a new 700 million share buyback plan. That is important and we can see how the number of shares outstanding has significantly declined over the past years. Pabrai would call this an uber cannibal stock. 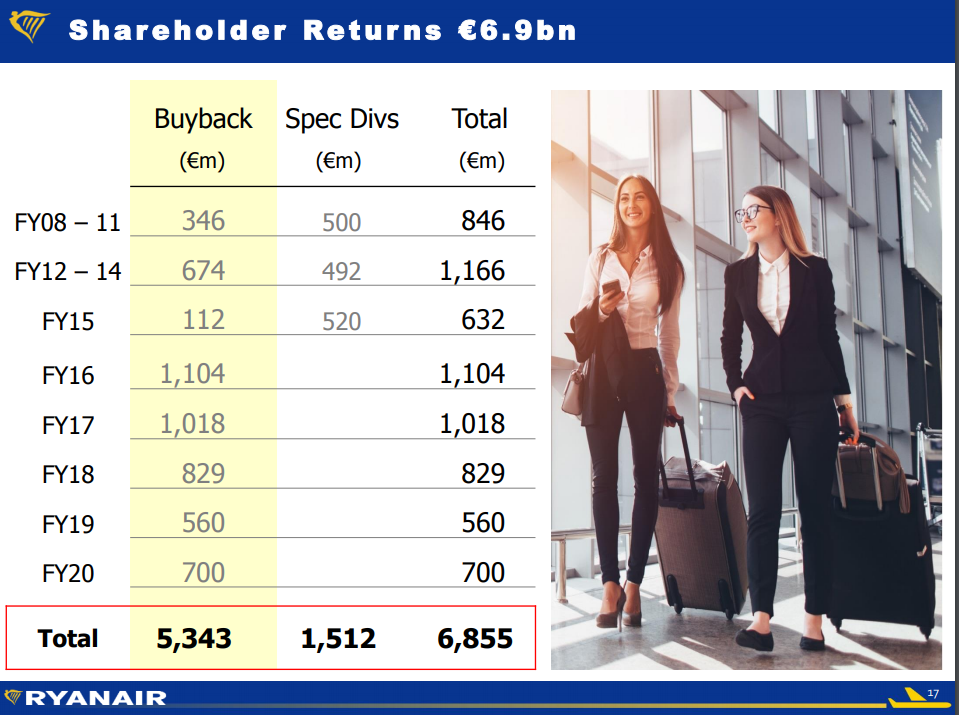 They know the price environment is weak, but they think share prices are low and their cost advantage is the key for the long-term. Thus, long-term, a good investment in a currently bad environment.

My question is: can somebody compete with Ryanair? For that we have to analyze the competition, their fare prices, profitability etc.

In whatever business you are, if you are the lowest cost operator, you will probably survive all downturns, grow market share and be a good investment. 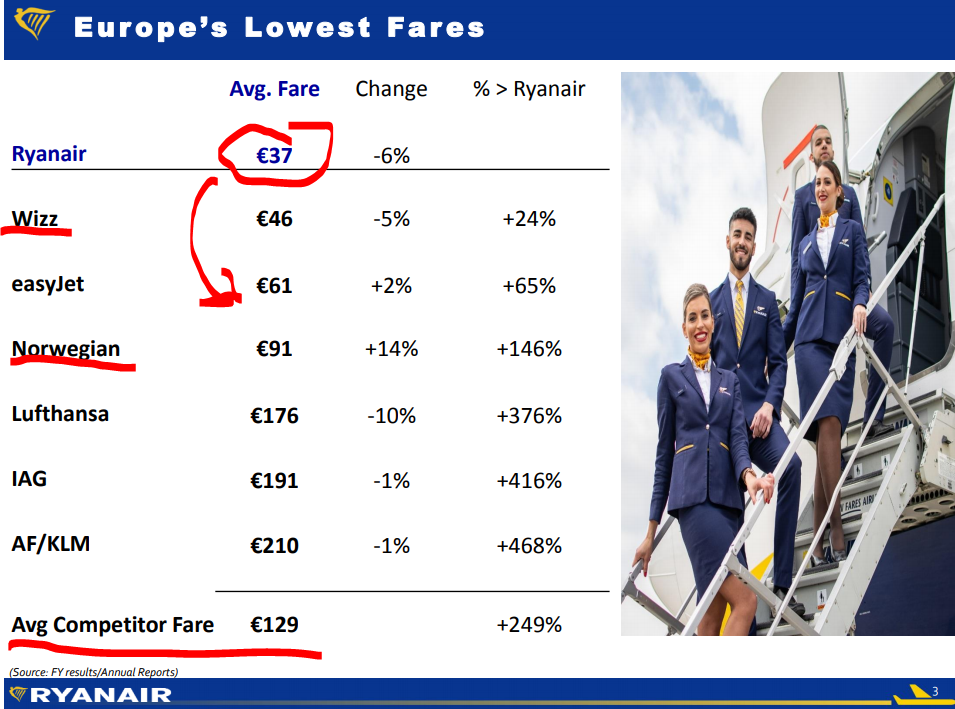 Ryanair has to be compared to EasyJet as Wizz is not really a long-term competitor as it will hardly survive as an independent airline. Therefore, Ryanair’s advantage is large when it comes to cost.

Ryanair’s business model is different as it is the only company that has significant scale to operate as it does by using remote, small, ex-military airports across Europe. 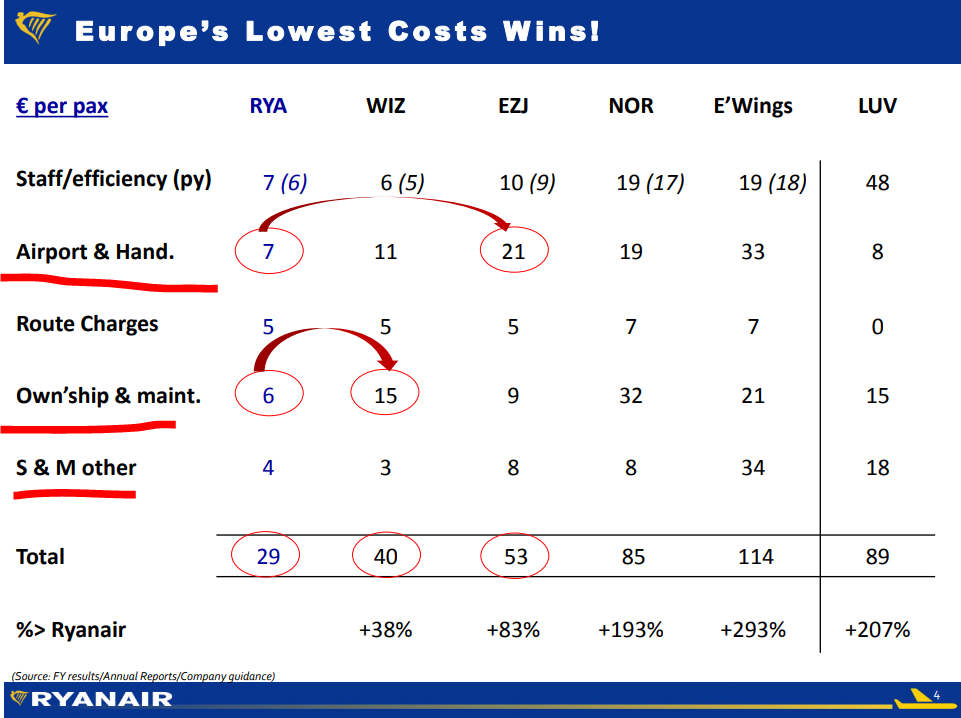 Ryanair’s scale is incredible and they are further planning to expand in Ukraine, Israel, Bosnia & Herzegovina etc. Plus, they might take advantage of bankruptcies in the future but they are not interested in expanding in Scandinavia due to high government taxes. 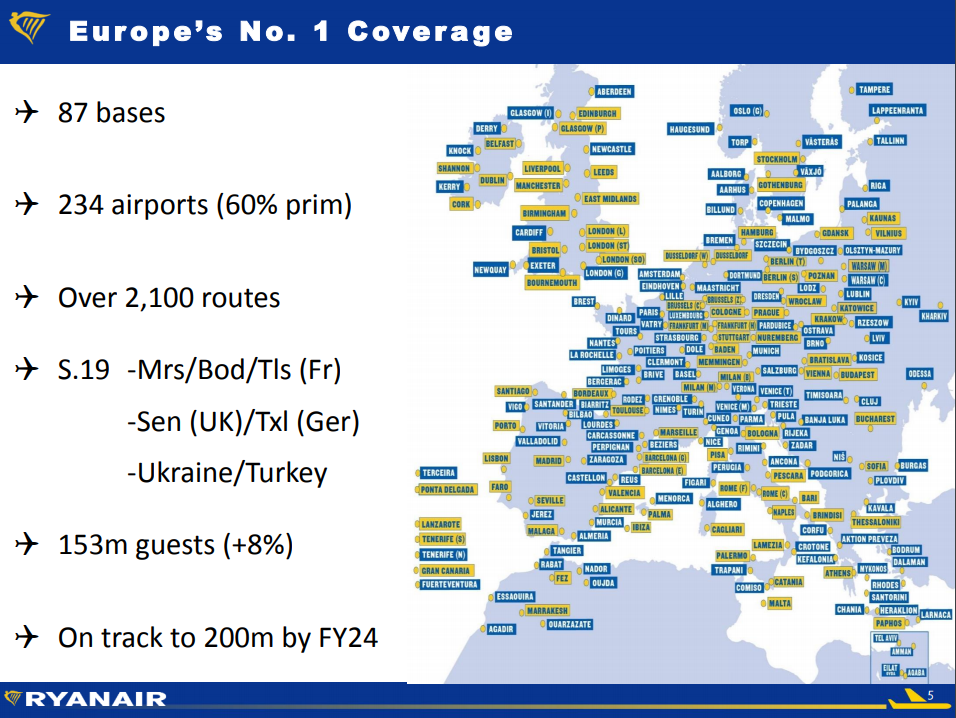 Given Ryanair’s business model, it actually doesn’t have much competition among customers that look for low prices. 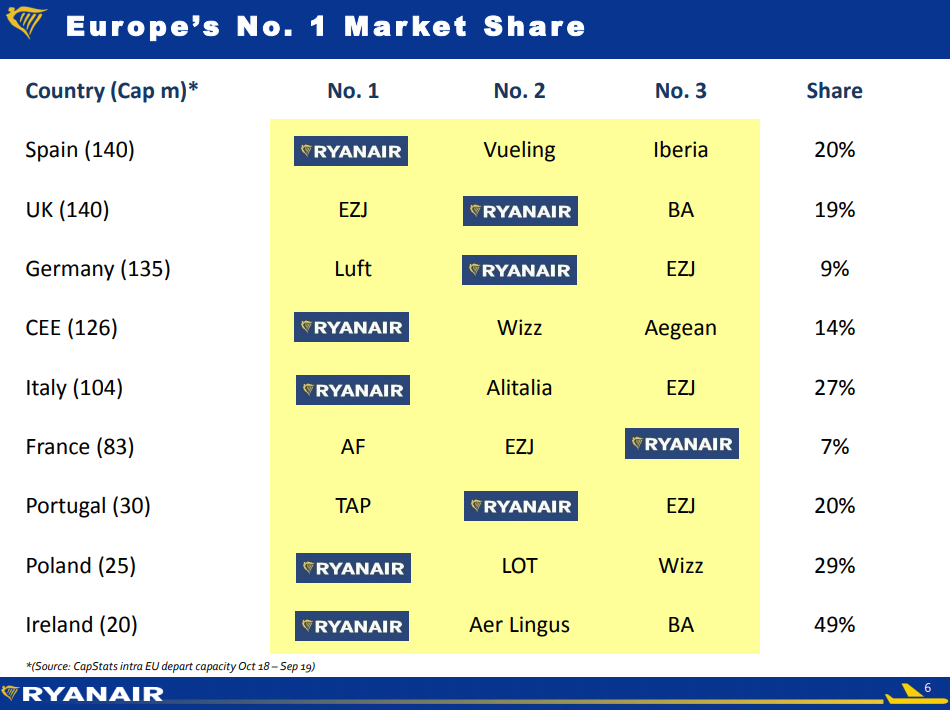 Good market share, in a growing market as more and more people fly. Further, Ryanair’s share is even higher with cost aware customers. All smaller airports want to get Ryanair into their hub and the others are not that of an interest as unstable.

When it comes to business analysis, the best thing to do is to go to Peter Barklin from Niche Masters Fund. He has been kind to share his Global airline industry presentation with me and I’ll use some slides to better explain what Ryanair could be. If we take a look at the demand curve for the industry, Ryanair covers a huge part of the market and given its low cost, it might really have a moat. 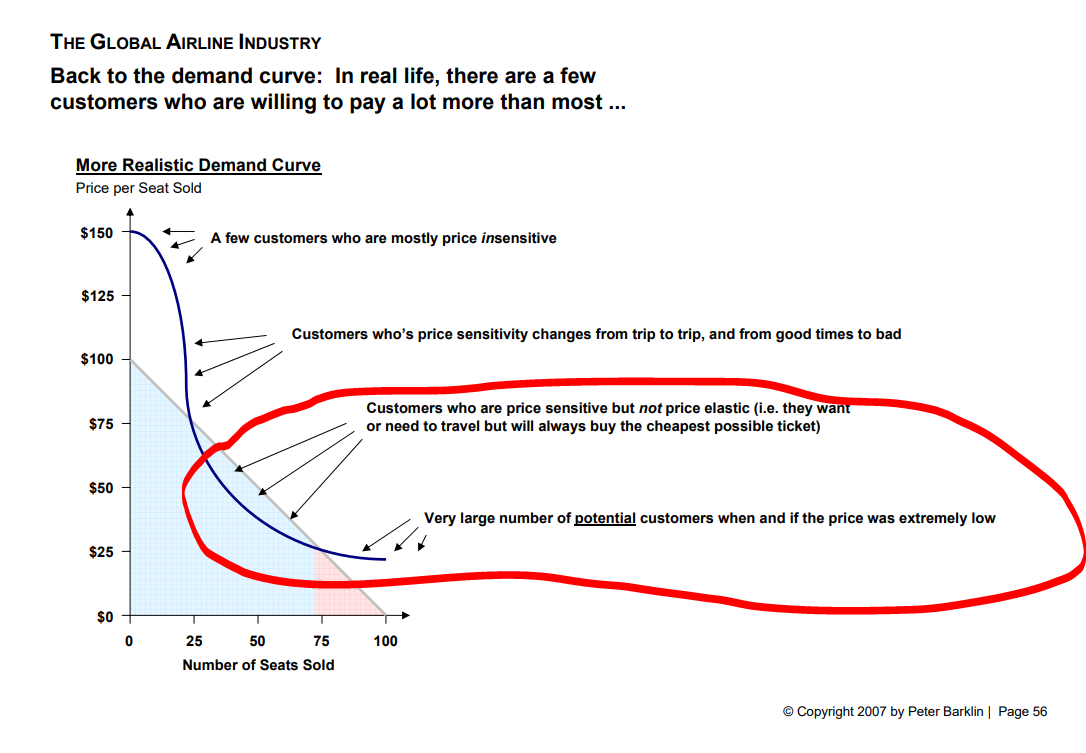 As Ryanair has a kind of advantage due to low costs, let’s see what is going on within the European market.

What does it mean low-cost? These guys print their logo and put it on an old laptop. As long as it is functional. Got to love such managers. Source: 2019 FY Ryanair conference call. 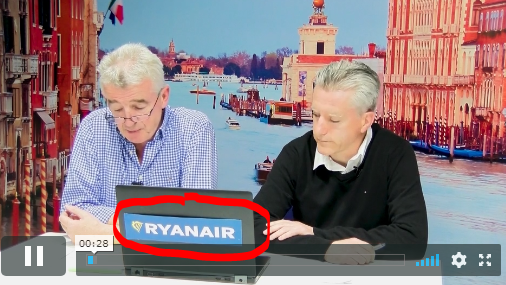 Consolidation will continue as many will fail. Ryanair actually hopes oil prices stay high so that they have lower competition in the future due to bankruptcies.

On fares, according to the CEO, fares in Europe are 25% when compared to North America and therefore have to rise at some point in time given that those are artificially low now.

If there is a price war, Ryanair will win due to the lowest cost. Profits might suffer for a year or two, and that is what shareholders should expect according to the CEO, but Ryanair should win.

The story is that there will be 4 to 5 big carriers in Europe and that is it, like in the US. Ryanair as the lowest cost, Lufthansa, BA AIG, Air France- KLM, with a question mark whether EasyJet will survive as an independent carrier – probably they will.

What did Buffett do when the industry consolidated and stocks were cheap? He bought them all, all four of them.

The market cap is currently at 11 billion EUR. Profits over the last 5 years, that have been good, were around 1 billion on average. 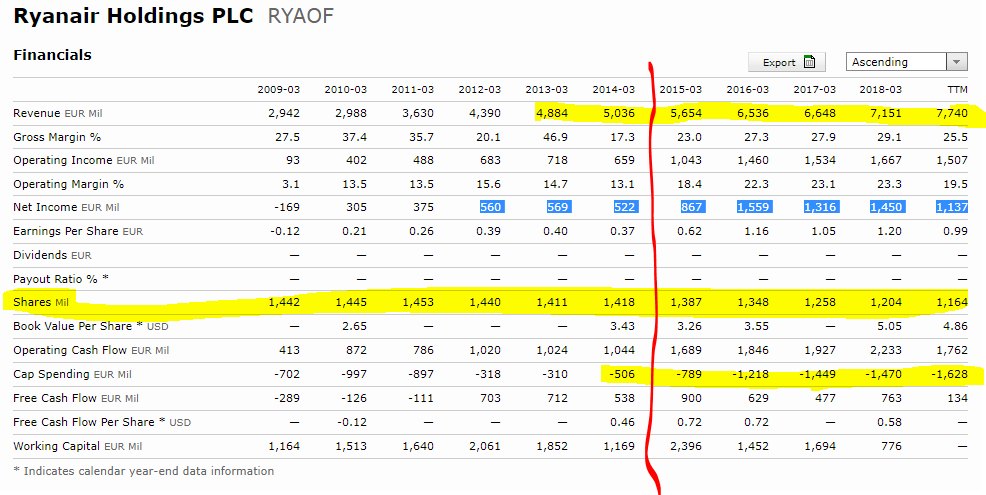 Management has guide for profits between 700 and 900 million, let’s take 700 million over the next two years. After two years, we can assume profits to grow back to 1 billion and above, as the market consolidates. Or, we could see profits go to zero, especially if we have a recession.

However, what is a given, is that Ryanair will reach 200 million passengers per year by 2024. 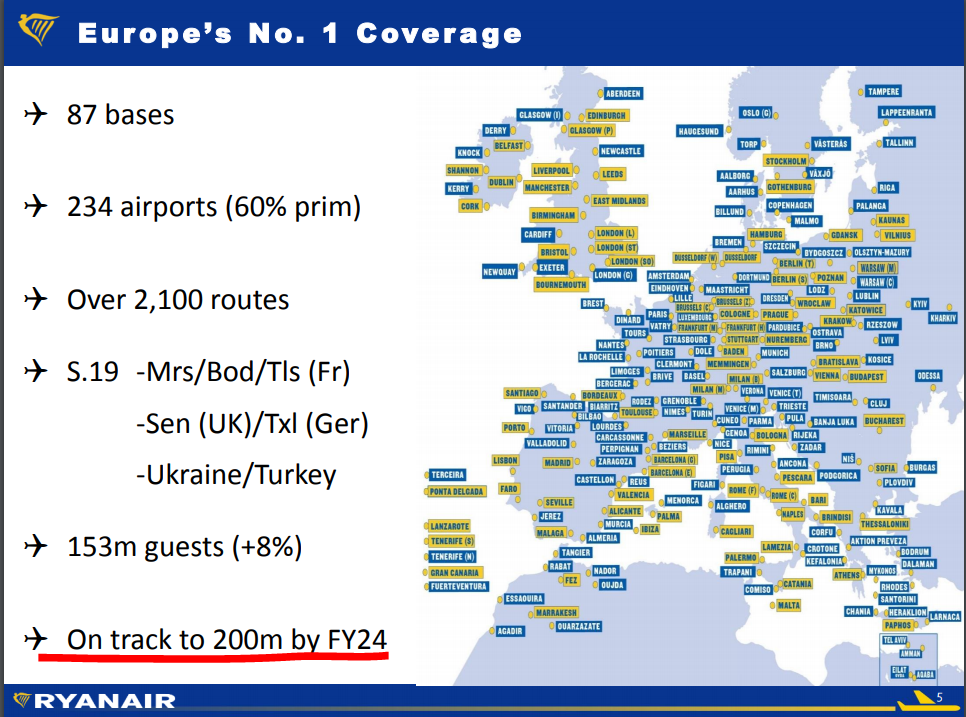 This implies growth of 25% in revenues from traffic and probably higher growth from ancillary businesses. If fares  in Europe increase by then, I would assume a 50% increase in revenues, add an acquisition and we are beyond 12 billion in revenues, perhaps even 15, depending on what is acquired. On 15 billion in revenue, with an average historic gross margin of 25%, net income could be 2 billion. If they continue with buybacks, earnings per share could be at 3 EUR and the stock price at 30, at some point in the next 5 to 7 years. That is a 16% return over the next 7 years. If it happens over 10 years, it is an 11.6% return.

If I look at earnings, it is impossible to make a model as airline earnings will always be volatile. However, I can estimate 2 years at 500 million, 2 years at 2 billion, 2 years at 1 billion and I would even add a year at zero and one at 3 billion. Thus, Ryanair will make a billion per year over the next 10 years, probably 1.5 billion. Thus, a fair price for a 15% return should be 10 EUR.

IMPORTANT STOCK PRICE NOTICE: If profits suffer for another year or two, the market will see only that. If there is a slowdown in Europe, this could get ugly. It is time to look at the sector and then be ready to strike when the situation looks like it was in the US a few years ago, when Buffett bought everything. However, there are always risks.

A plane crash – that would be a huge blow. Then the EU commission might get involved due to too much power the company might have. There is the Brexit, a probable EU recession over the next few years, EURO risks as the currency and the continent are fragile, from an economic, demographic and political side. So, plenty of risks there and the company doesn’t really have a margin of safety. Therefore, I would look at this only at business returns above 20%. At 1 billion, the stock price should be around 5 and around 7.5 EUR for 1.5 billion in earnings.

To keep on the watch list, it will also be a good indication for the European economy.