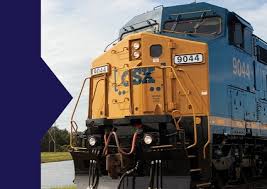 This CSX stock analysis is part of my full railroad stocks sector analysis. Here is the:

If you prefer enjoying a coffee and listening to the content, here is the video on rail stocks, CSX article continues below.

Long-time CSX investors are very happy with what happened over the last decade given the stock is a 10 bagger, not even including dividends.

This shows how prescient Buffett was when buying Burlington Northern in 2009. He got all of his money back already through dividends as all railroads improved their operating metrics, consolidated and significantly increased cash flows. Let’s see what kind of returns can we expect from investing in CSX railroad stock over the next decade.

The market capitalization is $61 billion, remember the number as it is the key for valuation.

CSX owns or operates the following railroads where it transports mostly merchandise (66%) and coal (18%):

2019 was a good year despite a small decline in revenue. The company managed to improve its operating ratio and lower costs which led to higher earnings and cash flows.

Improving the efficiency of a rail business is key. If the management can do that, then the finances follow. CSX has improved on all metrics in 2019.

Plus, when you have a railway, the more traffic on it, the more money you make. Thus, for growth opportunities they target highway and other transportation methods given that rail is cheaper and more environmentally friendly.

In short, CSX is a very well operated railroad where the good margins keep it profitable even in difficult times like the current ones.

But the company remained efficient and kept its operating metrics strong.

That consequently lead to the most important thing, positive cash flows. When you own a railroad, you have something of a moat and fixed costs. When there is enough volume your margins are high which is a great benefit in crises, like the current one, because you are still creating positive cash flows.

Given there was just a 20% cargo load decline in the worst economic quarter in history we can hope a bottom has been reached in May of 2020, I would say that business might return to 2018/2019 levels pretty soon.

To value a company like this, it is best to focus on cash flows available to shareholders. Before valuing the stock I’ll first discuss the fundamentals and dividend safety/potential.

A company that can steadily increase book value over time is usually a great business to own. The price to book value now is high and above 5, but in 2009, CSX was trading close to book value. This tells us that we need to look for businesses that provide a margin of safety, can expand margins and consequently increase earnings, even in unloved industries like boring railroads.

Over the last 10 years, CSX has doubled its long-term debt balance from $8 billion to the current $16 billion. However, debt as a percentage of total assets has remained stable over time.

Debt to cash flow and interest coverage ratios have actually improved as the cash flows increased over the last years.

Given the moat position this class 1 railroad has, the price advantage it has over other transportation methods, high margins, we can hope that debt won’t be an issue over time so we can focus on the cash flows to make a valuation. Also, it is likely that the dividend will be sustained over time no matter what happens with the economy.

1.3% is not much but the company is putting buybacks as a priority compared to dividends.

Over 2019, CSX has spent the usual amount of $763 million on dividends but a staggering amount of $3.37 billion on buybacks. Over the last 10 years CSX has spent $16 billion on buybacks but also increased their debt by $8 billion. We can say they are becoming more efficient in their finances and rewarding shareholders but doing buybacks at any stock price is not always the smartest thing to do in my opinion.

With 2019 free cash flows of $3.4 billion, the FCF yield is still a good 5.5% so buybacks at current levels should still be value adding because they can borrow at an average interest rate of 4.4%. However, the spread isn’t big and in crises, the cash flow will be much lower. Plus, there is the coal exposure risk.

I would say the CSX’s fundamentals indicate a certain degree of risk. The business depends on the economy and as long as there is enough liquidity to borrow at low interest rates, things will be ok with the stock price. But if interest rates ever go up and there is an economic downturn, the debt pile might become an issue with covenant breaches etc. With debt at 2010 levels I would consider CSX as low risk, but given they are using it to force buybacks, it also increases the risk for long-term investors.

CSX stock valuation based on FCF

Valuing CSX is pretty easy. In a good year, they make $3.4 billion in free cash flow. With a rebounding economy, hopefully coal demand stability, we can expect cash flows to remain around $3.4 billion, perhaps reaching $4 billion over the long-term.

When it comes to valuation, it depends on what kind of return are you happy with from your railway ownership.

CSX actually offers the highest cash flow valuation compared to other railroad stocks. It also has the lowest debt to free cash flow ratio of 4.7 and not at 6 like all others have. So, if we value it at the price of the rejected KSU takeover bid, there is 66% upside for the stock.

It seems the market is punishing CSX for its coal exposure. I know coal consumption is falling fast so that is one to watch when considering investing in CSX. Any kind of stability within the coal sector might lead the market to value it like it value other railroad stocks so watch for that.

For more information on other railways stocks, please check my comparative railway stocks article with links to detailed analyses such as this one.

If you like this comprehensive approach to investing, please subscribe to my newsletter to be notified when I analyse a new sector. To check my past analyses, covered stocks and portfolios, feel free to check my Stock Market Research Platform.