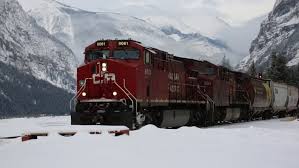 This Canadian National Railway stock analysis is part of my full railroad stocks sector analysis. Here is the:

If you prefer enjoying a coffee and listening to the content, here is the video on rail stocks, CP stock article continues below.

Like it has been the case for other railroad stocks, the application of precision railroading has improved margins while lower general interest rates increased the attractiveness of the created cash flows where good economic growth added to the mix. Consequently, Canadian Pacific stock is another railroad stock that has been a ten bagger over the last 10 years.

The market capitalization is $40 billion. To be used in valuations later.

We see how CP stock has quickly recovered from the current crisis and we have to see how sensible it is to invest into it now compared to other railroad stocks.

CP’s revenues are well diversified and there is not a big exposure to one specific segment. 40% of revenues come from bulk. As commodities have been in a slump over the last decade, a boom in such commodities might give a boost to CP. 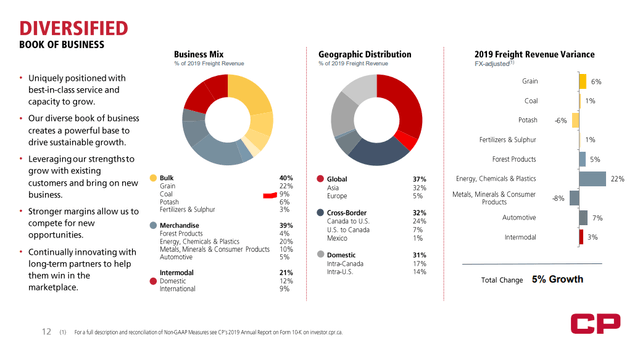 Given that growth in the railroad business depends mostly on the economic situation and demand for transport, companies try to find other options to grow. CP’s focus is to develop its available land as a primary growth focus because other options mostly depend on demand. 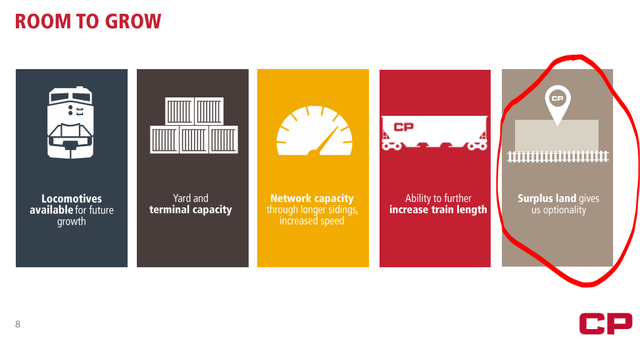 Of course, the return on such investments will depend on traffic and economic activity, but it is good to do if the return on capital invested is high alongside other operational improvements.

All in all, CP is a stable railway business, class-1 and will like be in business for a long time. Let’s take a look at the fundamentals.

Over the last years, CP has achieved slow but steady growth in revenues and operating earnings. Improved operating ratios allowed for significant net income growth while buybacks pushed earnings per share from $8.4 in 2015 to $16.44 in 2019.

However, free cash flows have remained stable at $1.3 billion as the company is constantly investing. Average capital expenditures are around $1.6 billion.

With returns on invested capital constantly in the teens, it shouldn’t be a bad factor to invest so much.

Debt to assets is in line with other railroad stocks but has been increasing over the years.

The CAD$8.2 billion maturities should be manageable despite the currency risk there.

The company has been paying approximately $300 million per year in dividends while buyback spending depends on the year. They spent $1.7 billion in 2014, $2 billion in 2015 and $885 million over the last twelve months.

Their strategy is to constantly increase the dividend and also do as much buybacks as they can.

In general, apart from the large above average spending in 2014 and 2015 on buybacks, they are spending their available free cash flow partly for dividends and mostly for buybacks. The free cash flow is what I am going to use in valuation because I don’t like it when a company takes on debt to do buybacks. They spent $2.7 billion on buybacks in 2015 but also issued a $1.16 billion 100 year not with an interest rate of 6.125%. That debt and interest payment is going to be there up till 2115 while the buyback yield might not be above 6.125%.

With free cash flows of $1.3 billion on a $41 billion market capitalization the free cash flow yield is just 3.1%. Of course, there could be some growth coming their way from an improved economic situation in North America or higher commodity prices but I would say their growth will be in line with the growth of the whole rail sector.

A free cash flow yield of 3.1% is really low but given the position the company has, the fact that you can’t avoid it when doing business, especially with the needed commodities where its revenue fell only 9% in Q2 2020 compared to CSX’s total revenue decline of 26%, is a clear indication of strength. So, the question is how does such a good business fit your portfolio at current prices?

Canadian Pacific’s focus is to reward shareholders through buybacks.

Doing buybacks pushes the stock price higher and higher and one can argue weather that is good and for whom it is good. It is good for those selling the stock at higher prices but actually not good for long-term investors because the yield on their reinvestment is lower and lower as the stock price goes higher. Plus, the debt burden is going to be there for the long-term. Doing buybacks at any cost is a game that will backfire at some point in time. But, as all the other railroads are doing it, you would be the only stupid one not doing it.

Actually, the only railroad that has no debt and isn’t doing any crazy buybacks to push its stock higher is Burlington, owned by Berkshire. It is interesting how all other railroad stocks have similar metrics so Burlington stands out. In the short term, given the management’s focus on buybacks, all railroad stocks might go higher, but in the long-term, be ready to see Burlington take them over at bargain prices when the current positive environment changes, it always does.

If you are an investor in Canadian Pacific, think about your strategy, will it be to sell when the stock price goes higher thanks to buybacks because holding for the dividend isn’t smart anymore because it isn’t the management’s focus. The buyback game is made for the stock to be sold at some point in time. Unfortunately, nobody knows when the buyback game ends.

For more information on other railways stocks, please check my comparative railway stocks article with links to detailed analyses such as this one. Also, if you enjoy such a comprehensive sector analysis approach, please consider subscribing.

From a fundamental perspective, the best railroad stock to buy on the market is Burlington through Berkshire.

If you like this comprehensive approach to investing, please subscribe to my newsletter to be notified when I analyse a new sector. To check my past analyses, covered stocks and portfolios, feel free to check my Stock Market Research Platform.