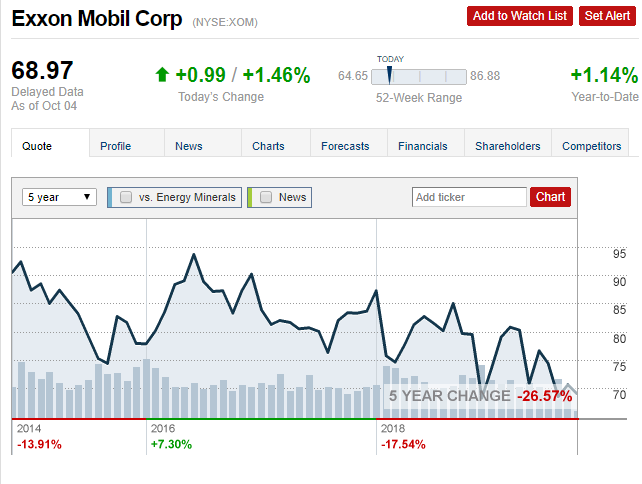 The biggest risk when it comes to investing in XOM is that the management never stops believing in the everlasting fossil fuel growth scenario!

Exxon’s future is binary and it has to be approached that way – it will either do great or fall miserably.

Short-term, the asymmetric risk/reward is skewed towards the risk. A dividend yield of above 7.5%, including future dividend growth, should be a fair reward for the risks.

A look at XOM’s, Bloomberg’s and McKinsey’s perspective on the future of oil will give you enough data so you can make your own decision.

I don’t think Exxon Mobil (XOM) needs any kind of introduction so we can immediately cut to the chase.

If you prefer watching, enjoy the video, article continues below!

XOM is a stock that did really well over the past 50 years, but performance has been choppy over the last 12 years.

Further, the stock is close to multi-year lows and it is a good time to look at it to see what is going on in the environment as oil also gives a good indication of the general situation in various markets, especially the energy sector.

We have to see whether the stock is in a cyclical downturn, like it was the case in 2009 and 2015, or it is a structural downturn?

The last SEC filing from XOM disclosed how they expect 50% lower net income in Q3 2019 due to lower oil prices.

Demand for oil has been much slower than expected over the last months. Is it because of trade war issues or are we looking at a structural shift?

We are going to answer the structural shift question a bit later, but before I wish to show the composition of the S&P 500 (SPY) in 2011. XOM was the largest company, now it is in 12th place. The market doesn’t believe there is much growth ahead for the company, at least compared to FAANG stocks, no matter the dividend and strong earnings.

The decline in comparative market capitalization is due to oil prices falling from above $100 per barrel to the current levels. Perhaps those will go even lower as the next decade will be the decade when the actual shift from fossil fuels to renewables becomes reality. As would Buffett say, it is extremely important to be in businesses where tailwinds prevail rather than headwinds.

Let’s see if there are headwinds or tailwinds ahead for XOM. I’ll first share XOM’s perspective and then Bloomberg’s to conclude with a neutral perspective from McKinsey.

A look at XOM’s capex versus cash flow shows how they are extremely bullish on oil. When you are happy to spend 75% of your cash flows into capital expenditures, you must be pretty positive about the future within your sector.

Assuming an oil environment of $60 per barrel, XOM expects to increase cash flows by 50% over the next 5 years.

The positive growth assumption is based on the premise that the new investments will be much better than the past ones and that return on capital employed will be almost 3 times the 2016-2018 average on flat oil prices. Those are pretty optimistic assumptions. I understand the low returns during the 2016-2018 period were due to the decline in oil price, but still such growth in ROCE includes aggressive assumptions.

They are heavily increasing investments and future production in the Permian basin.

But what I like to focus on is the risk and reward of potential investments. If oil drops to $40, something that can happen anytime, Permian investment earnings will be less than half compared to oil at $60.

The Guyana upstream investment is also borderline profitable if oil drops to $40.

They plan to continue to spend 75% of their operating cash flows to finance the growth over the coming two years.

All the investments are based on the premise that the world is going to continue to grow and that the growth will be based on fossil fuels.

In XOM’s view, renewables are irrelevant even in 2040, less than 5% of the total energy contribution. Of course, we don’t know what the future will look like, but less than 5% is something that I am pretty sure it is a very pessimistic outlook for renewables. Of course, a different outlook would turn many XOM investments to unprofitability.

Let’s see the opposite side of the medal.

The key thing here is whether you have a dynamic or fixed mindset. At the end it will all be about cost. If the renewable technology develops fast enough for it to be cheaper than oil at $60, oil will have to fall to $40 and lower to keep being relevant. If we look at the global solar irradiance map, we see that the countries where the most demand for fossil fuels is expected to come from, have extremely high and positive solar potential.

Bloomberg sees renewables making about 50% of the global energy mix in 2040. That is a huge difference when compared to XOM’s few percentage points.

The demand erosion from a linear implementation of EVs, would already be very detrimental to oil, not to mention renewables.

It would be especially detrimental to XOM as the investments they are focusing on like deepwater or shale oil, wouldn’t be that profitable anymore.

McKinsey created a nice chart showing what you have to believe in and the impact of such a scenario on oil prices. For oil to remain at current levels, nothing has to change and demand growth should meet expectations.

There are many tech factors that offer the potential to disrupt oil:

If energy storage suddenly becomes profitable, cheaper than oil, the shift will be fast and it will be especially fast for XOM investors.

As stock prices represent nothing more than what investors expect the business to do in the future, when there will be clear indications that a shift in technology is coming, XOM’s stock will fall, and will fall hard. The current dividend does not justify the risk of holding XOM.

If the shift in the market’s perception comes in 2023, I expect that investors will demand a 10% yield from XOM, consequently, alongside lower oil prices, I would not be surprised to see XOM at $30 or lower.

Many think the shift is far away, but I think the signs are real and the next decade might be the decade of fast new tech adoption. I think our next car will be an electric one and Amazon thinks the same. What Amazon did to retail will probably be what renewables will do to XOM and big oil.

AMZN’s zero carbon emission goal is just 10 years away. They are doing it not because it is nice, but because they expect it to be the most profitable option in 10 years and they are ready to invest in it.

Further, a new study showed that even gas will be obsolete because of the quickly declining costs of renewables and storage.

The thing is that it will not even be profitable to operate an existing gas plant.

Further, countries like China, India and Germany don’t have the natural resources Saudi Arabia or the US have. So, why would they keep buying expensive fossil fuels if they don’t have to. Some say that India will be selling 100% EVs by 2032, china one fifth by 2025.

Even the IEA is uncertain about what will happen in the future and it has two scenarios. On ok for oil and the other very bad.

The sustainable development scenario shows that we have passed peak oil:

So, there are two scenarios for XOM investors and it is going to be binary.

If things remain good, you might see your dividend yield go to 7% or perhaps a bit higher over the next few years, but you will always be exposed to the risk of a 50% or larger drop in only one year, when reality hits Wall Street. This is investing, it is up to you to see what are your options. I don’t like such risks and prefer low risk, high reward situations.

I personally prefer copper as a way to be exposed to both economic growth and renewables. Whatever scenario develops, I’ll do well. Check my article on the potential copper boom in the next decade.

The opinions expressed – imperfect and often subject to change – are not intended nor should be taken as advice or guidance. The Sven Carlin Stock Market Research Platform is not an investment advisor or financial advisor. The Sven Carlin Stock Market Research Platform provides research, it does not advise. The information enclosed in this article is deemed to be accurate and reliable, but is not guaranteed by the author.