To Buy or to Sell Stocks with Crash Coming? Doesn’t Matter for Value Investors – Buy Value

I received this very interesting comment from a subscriber as I bought my 5th stock for my lump sum portfolio which is now 50% invested. So, I invested 50% of my portfolio over the last 3 months that might surprise people scared of the upcoming crash or recession.

I have 3 points to answer this question:

Nobody knows what will happen with the market, we have the last two crashes in our mind that were close to 50%, but that doesn’t mean it will happen again. Nobody, and I mean nobody knows.

For example, my largest position in January 2018 was Nevsun Resources. 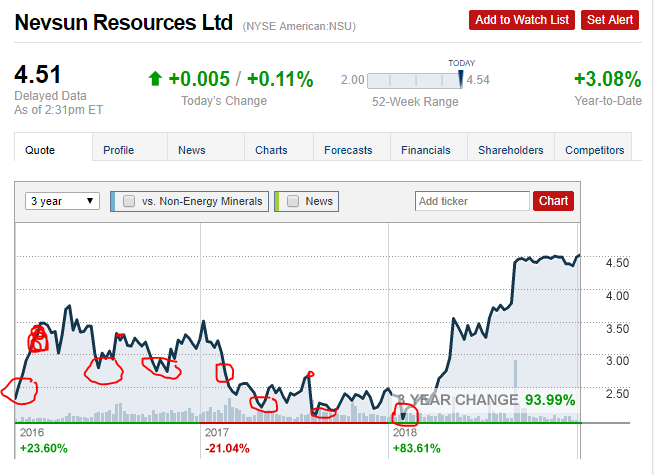 In January 2018 there were fears about China slowing down leading to a copper crisis etc., fears of a recession and market crash over the next two years with Ray Dalio saying there is a 70% chance for an U.S. recession. I would have been better in cash than investing in a copper miner, right?

Well, all depends on value, if you find it, even if a recession happens, your returns are delayed by a year to 3. The point is that if you buy value, you will survive those bad years and get ahead after the crash. So, I, as a selective investor, simply buy when I see value and when I am happy owning the business. It has rewarded me very well in the past no matter the possible crashes. And yes, I lost money in 2008, but it is not comparable to what I made from 2009 onward and from 2002 to 2008.

For those who invest in index funds, just invest on a monthly basis, just dollar cost average and forget about stocks, don’t even think about it, you will get your returns whatever they will be, own your home, invest in another property, diversify and you will be well off. Your wealth doesn’t depend on the market, but mostly on you and you not doing stupid things like most did, I.e. selling in 2009 march.

I know if there is a recession my portfolio will get hit, but I also know that the highest possible return I will get is when I buy value when I see it. So, in good years I will have great returns, in a bad year, I don’t know how I will do. There is a nice passage in the book Margin of safety by Seth Klarman discussing how when you buy value, real value, it often offers downside protection as it is already depressed in price and the price can’t go much lower. All my current 5 stocks trade below book value, mostly tangible book value, have high earnings yield and potential. So whatever happens, I am a happy owner, owning assets and that gives me a margin of safety.

To explain in an easy way what margin of safety investing is, I’ll make the next video article apple.