Over the past months I have received more than 10 emails from various investors about how Thor Industries is a great, cheap, value investment. 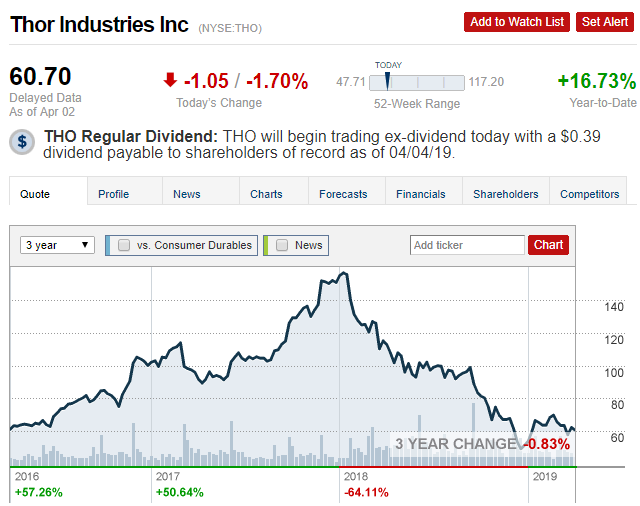 The first emails started coming in when the stock price fell from above $150 to around $120. Since then, the stock fell another 50% to the current $60. Ouch.

In this article I want to talk about this because it is an excellent example of how many value investors get trapped.

How value investors get trapped? 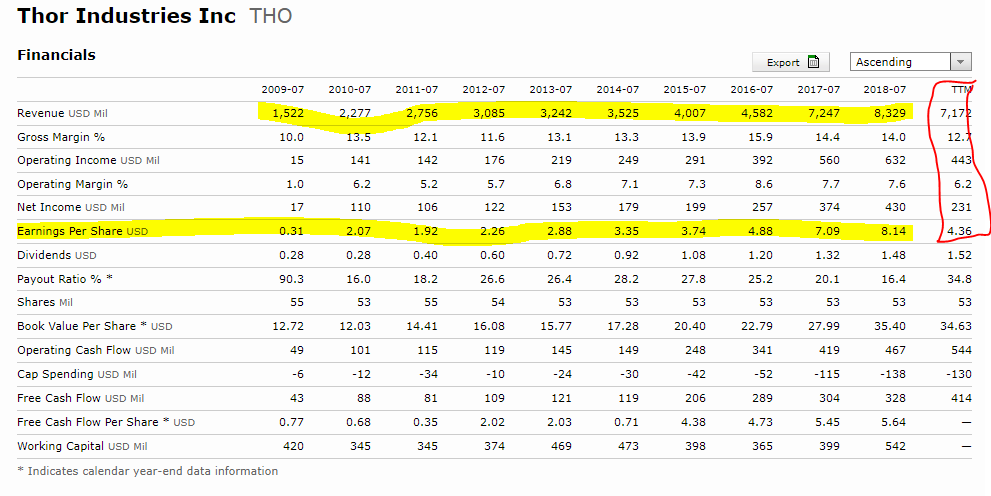 However, then reality struck. Earnings halved, revenues declined and the company took a lot of debt to buy an European RV produces at cycle peak.

They did make $1.6 billion in operating cash flows in the last 10 years, but they also spent $927 billion on acquisitions not including the last acquisition. 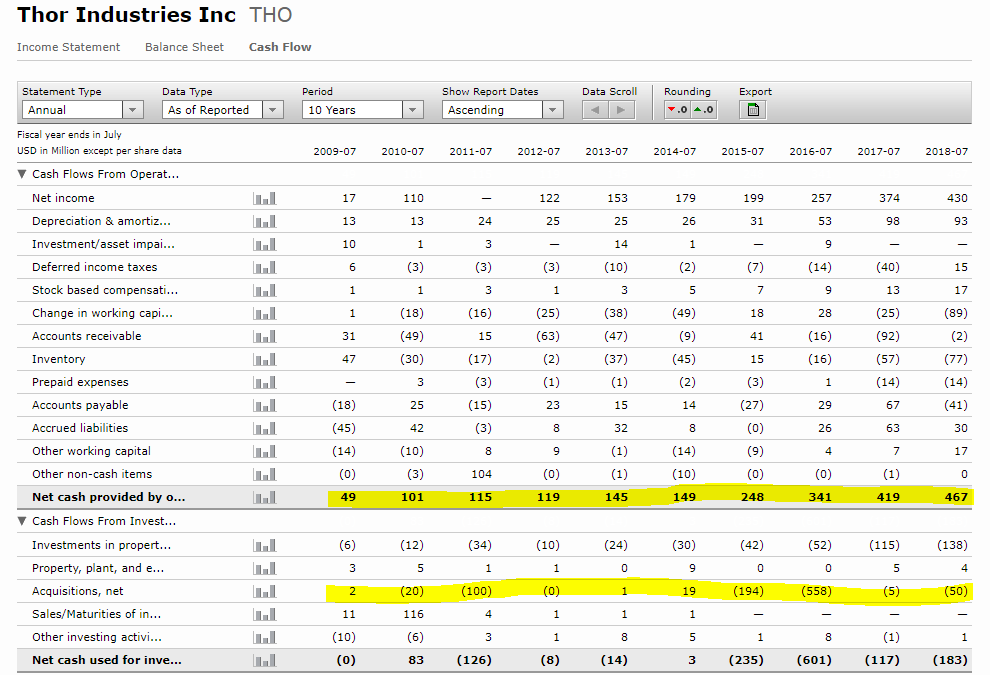 The acquisition and positive RV environment in the US allowed for nice growth. Investors usually look at the past and think the same story will continue, but it doesn’t have to be so. In a highly cyclical industry things change fast. The company’s last quarter shows a loss and if there are more troubles or costs from the recent acquisition, the decline in sales continues, we could see negative earnings for 2019 which would not make this look like a bargain anymore. 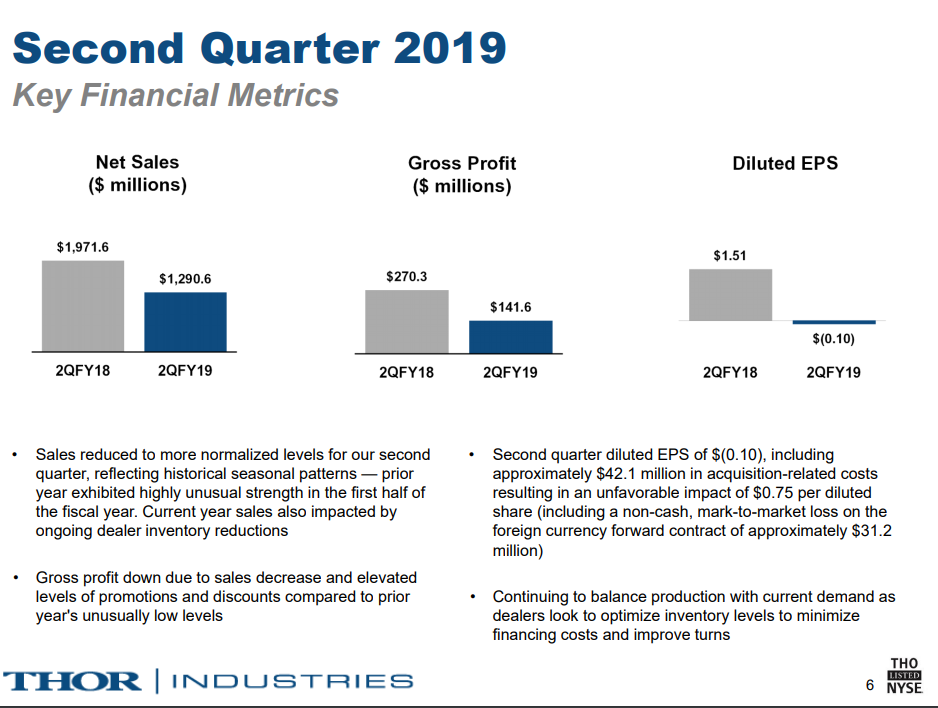 I think the same story happened with TATA Motors, when many saw it as cheap with a PE ratio of 7 and a high dividend yield. 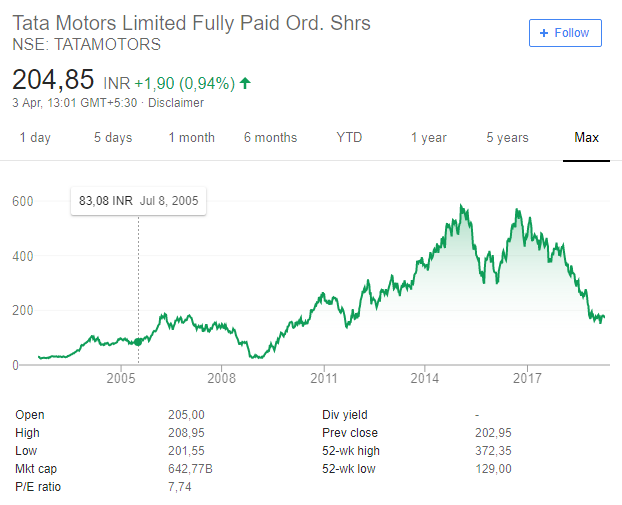 The long term chart of TATA is similar to Thor’s. The only difference is that the exuberance with THO was much shorter. 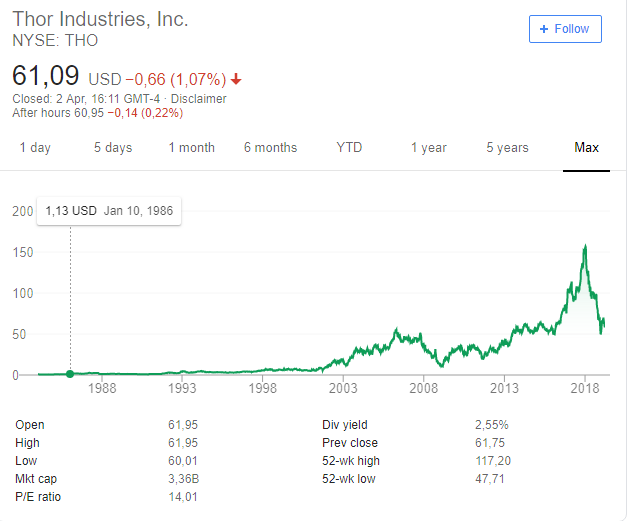 On the chart, many just look at the drop from $150 to $60 and invest on the hope it will go back there. If you look at a chart when you invest, please also look that the stock was trading around $50 from 2014 to 2016 which doesn’t make it look like a bargain. I get probably 10 emails per week about how this stock is cheap because it fell 50%, nobody sees that it went up 200% prior to that. Another trap unexperienced value investors fall into.

Is Thor a good investment now?

I recently listened to an interview with Howard Marks and he put is very simply. When investing you have to look at where we are in the cycle now. Nobody can predict the future but you can see where we are now.

The first thing is to look at inventories, and those are high with dealers. 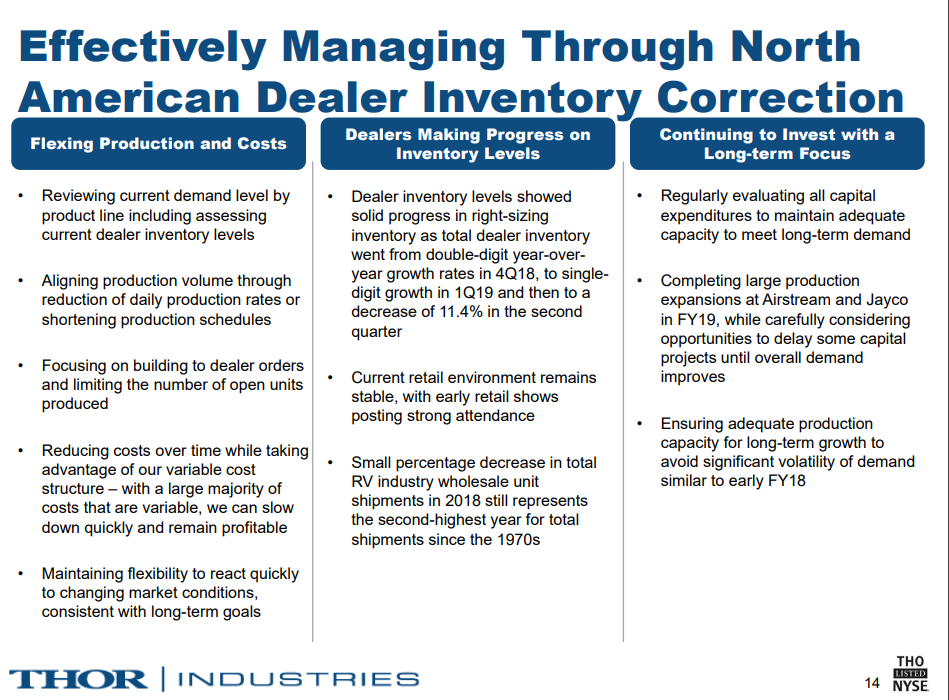 Let’s take a look at the industry. 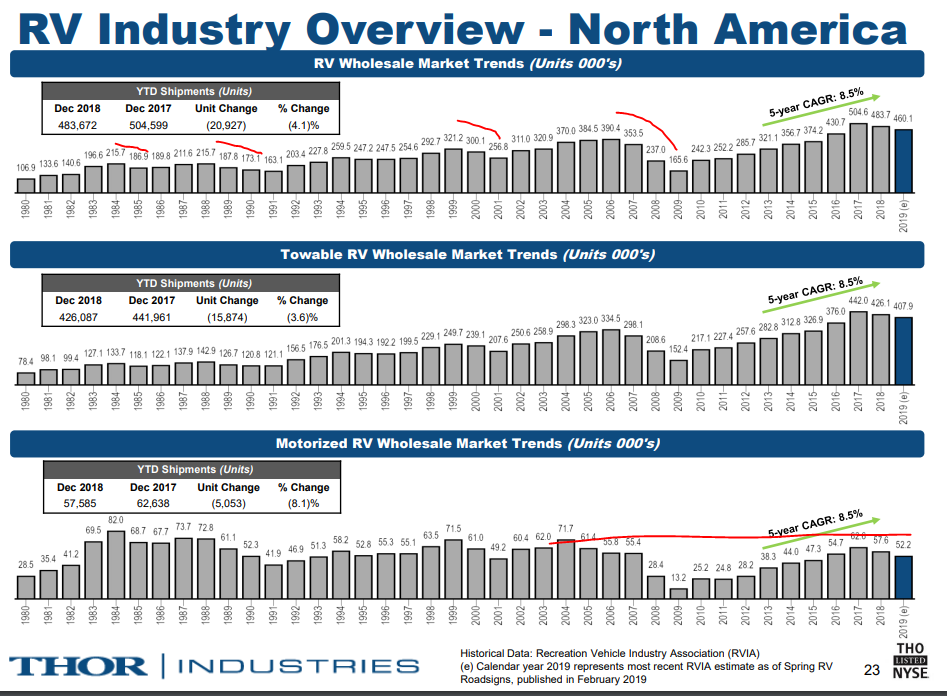 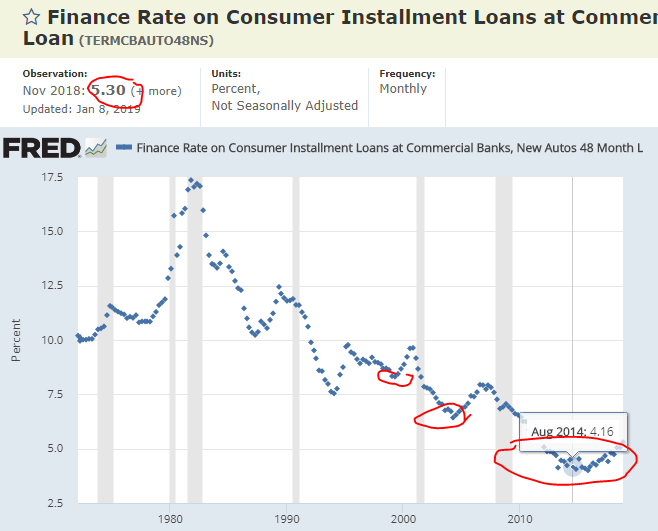 Plus, an RV is really a luxury purchase, one that can be postponed easily and when the market contracts there is also a lot of inventory to be dealt with. RV dealers go bust, fire sales can make the environment very tough. From 2006 to 2009 sales dropped 60% for the industry. I think we are now in 2007 for the RV cycle, the peak has passed and the growth turned into a decline. Those who wanted an RV, probably bought one in the last 5 years as the conditions were perfect, long lasting economic growth, low interest rates on investments, high stock levels, a lot of money etc. It is really a discretionary purchase.

Then, they made a big acquisition in Europe at cycle peak too. The environment isn’t growing, there is a lot of competition from glamping or from mobile homes crated by the camping sites and I don’t see a positive for RV in Europe in the long term. 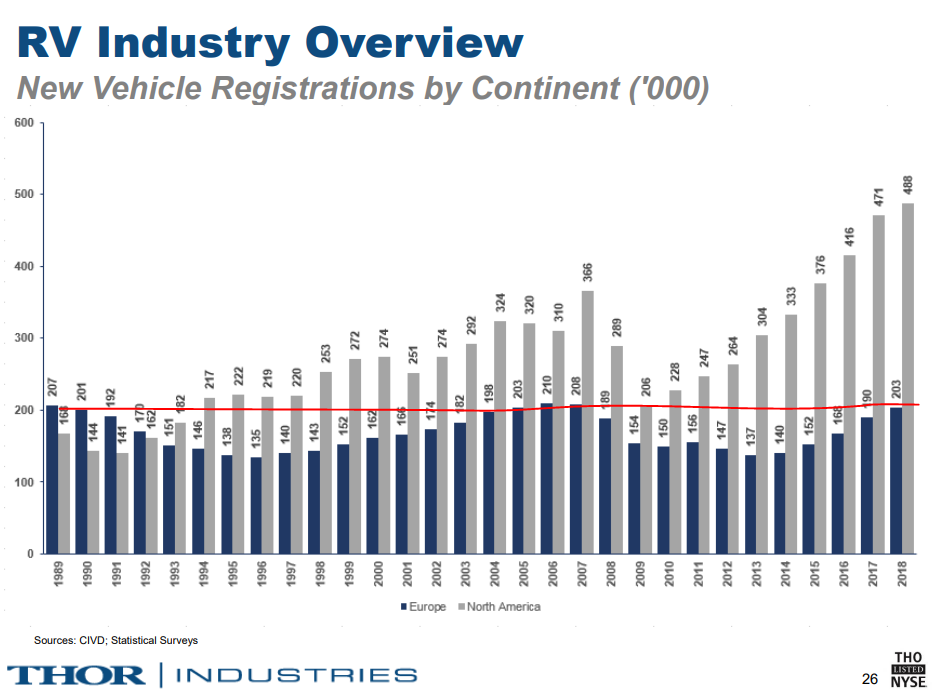 For example, German tourists used to buy an RV and go to Croatia for the summer. However, now, RV space is replaced with small homes already there. It is more convenient, similar experience and you don’t have to do a thing. 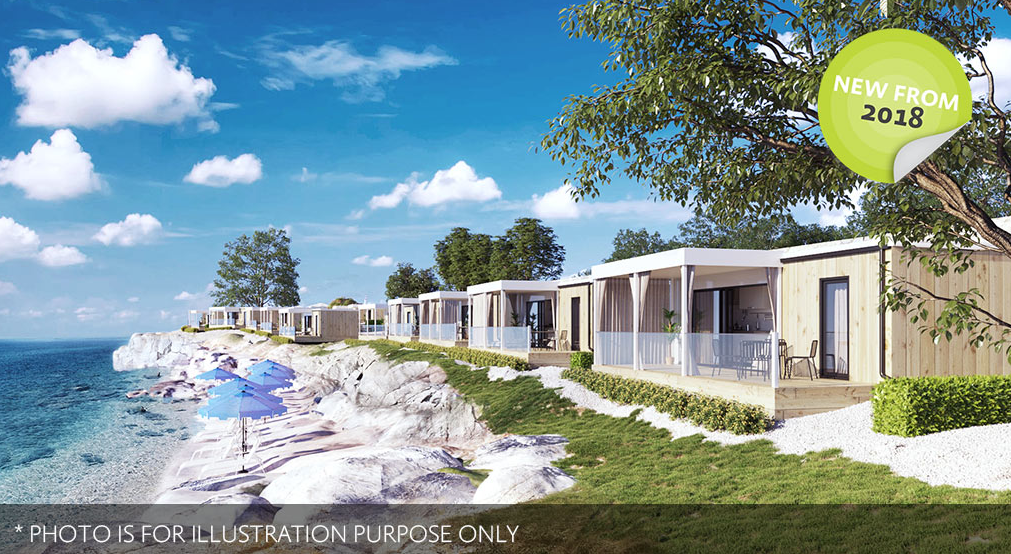 On the bigger picture you can see how more than half of the camping site has been closed with these kind of homes. 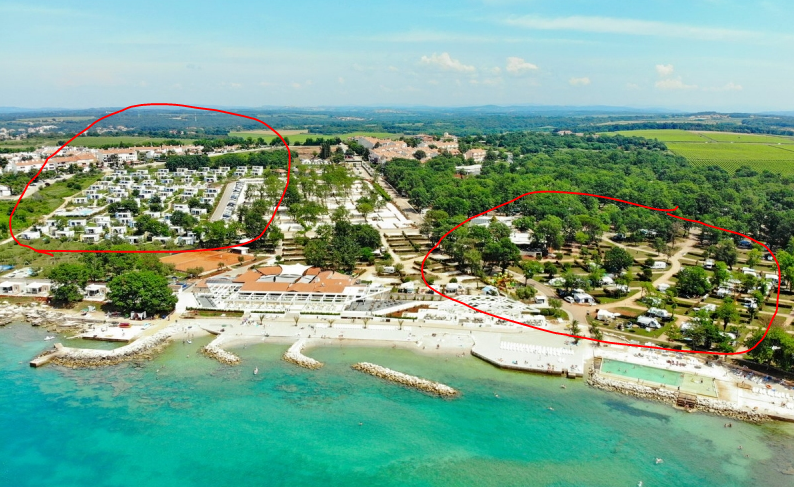 So, we are in a place where the trends in the industry in the US are negative but probably still above cycle average. The average in the US will be around 300k units sold, still 40% down from where we are now.

In Europe the average will be 160k and declining but we are now at 200k. Forget about growth in Europe.

In the US, the management discusses 77 million households camping and how they should all buy an RV. 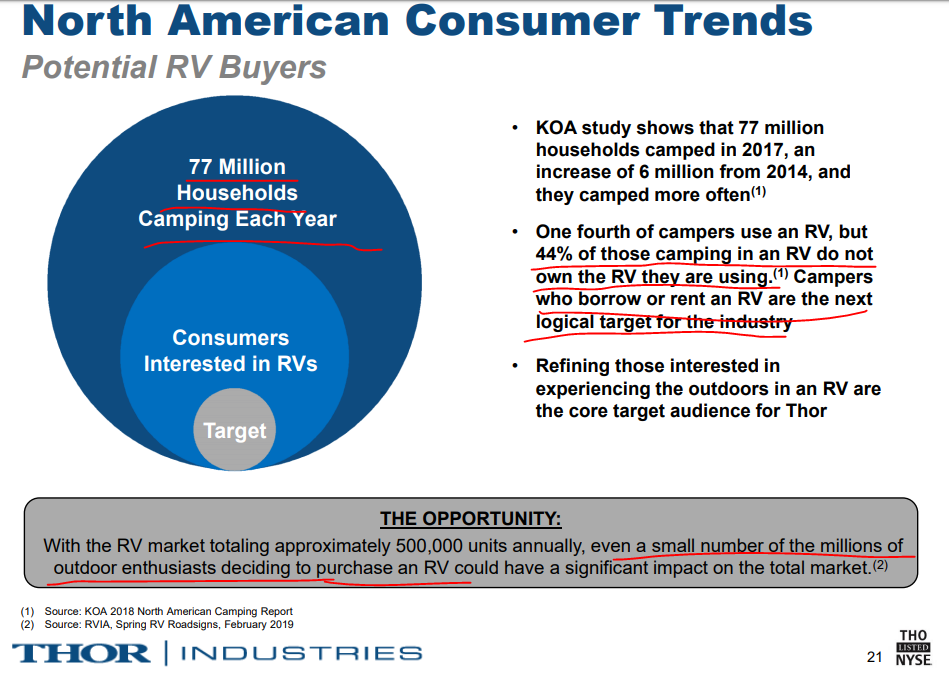 But they forget that 500k units per year sold quickly brings you to 5 million that saturates the market soon as not all campers want to own an RV.

Plus, consumer confidence is usually at its peak in the late part of the cycle. When it declines, RV sales erode. 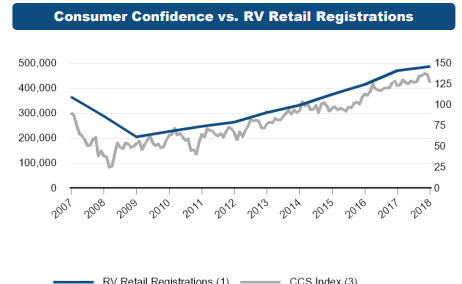 When RV sales erode you need to have strong financials and no debt. THO didn’t have any up till the Hymer acquisition.

Now the company has about $3 billion in debt which should cost them $150 million in interest per year. If I take 2015 as the average cycle year, the cash flows have been $200 million which makes it just $50 million now.

I don’t see growth in Europe as the market is changing fast. Trust me, Europe is not the place to go around with large RVs and travel.

The debt is a certainty, there is high risk of firing back and then things get ugly as those are getting now.

The conclusion – look at the long term average in the cycle for the company, this will give you a good indication o the value and the investment potential with a margin of safety. Remember, where are we in the cycle now?