In the last few weeks I have received probably more than 5 tips from various sources to look into Porsche SE, because it is extremely undervalued and there is a lot of potential for the stock over the next few years. I’ve read a few hundred pages of reports and this article summarizes my conclusion.

What is the deal?

Porsche SE (PAH3) is a company holding Porsche’s family stake into Volkswagen (VOW3). In 2007, Porsche tried to take over VOW, the didn’t make it and VOW took them over. As part of the deal the Porsche family got shares in VOW. The following is the holding structure: 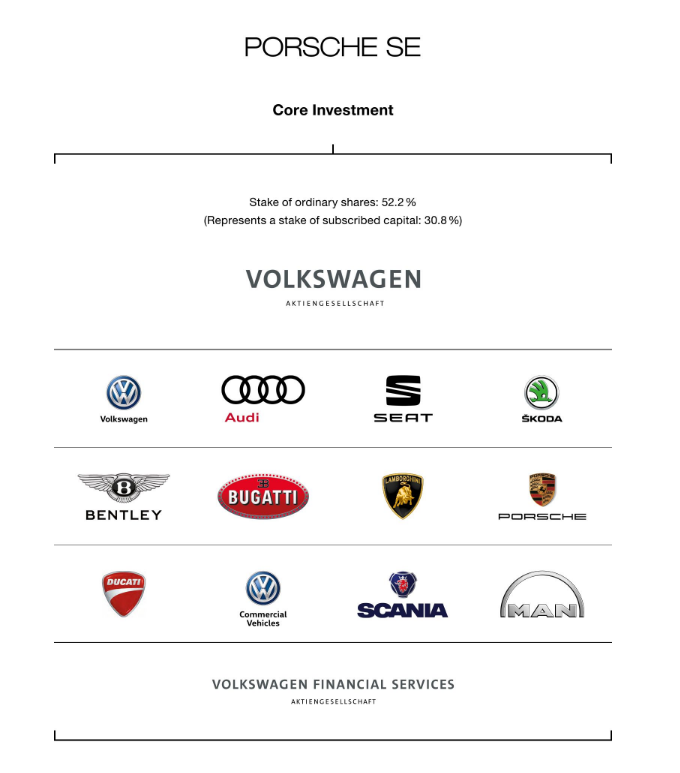 It is important to note that the Porsche-Piëch family has all of the voting shares so you can only buy preference shares. (Also traded as ADRs on NYSE)

The discount is sometimes bigger and sometimes smaller as the stocks don’t trade in sync. 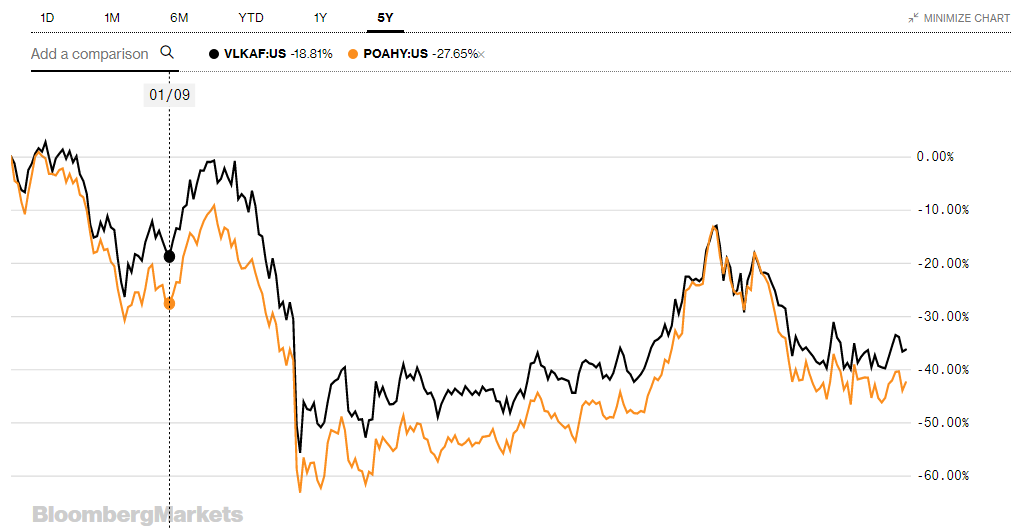 In any case, buying PAH gives you a 24% discount on VOW at the moment. The key is to look at whether VOW is worth buying in the long term and one can always debate about the holding discounts.

VOW, like any other car company is a cyclical and you have to put it into that bin or folder. Cyclicals do very well when the economy is doing good and terribly when the economy is slowing down as companies buy less cars etc. However, you can only postpone a purchase for a year or two, sometimes a bit longer, but then buyers usually rush back to replacing their old cars with new ones.

Can we predict the cycle? Impossible to do accurately, especially with all the central bank interventions. So, what I prefer doing is simply estimate a recession every 5 years, see how an average one would hit the company, see how the company is doing when things are fine, like those have been in 2018, and get to average earnings that we can use to calculate intrinsic value.

In my book, Modern Value Investing, I analysed Daimler as an example, when writing the stock price was €70, my fair value was closer to €40 and fortunately for my book sales, the stock is closing in on the second price. 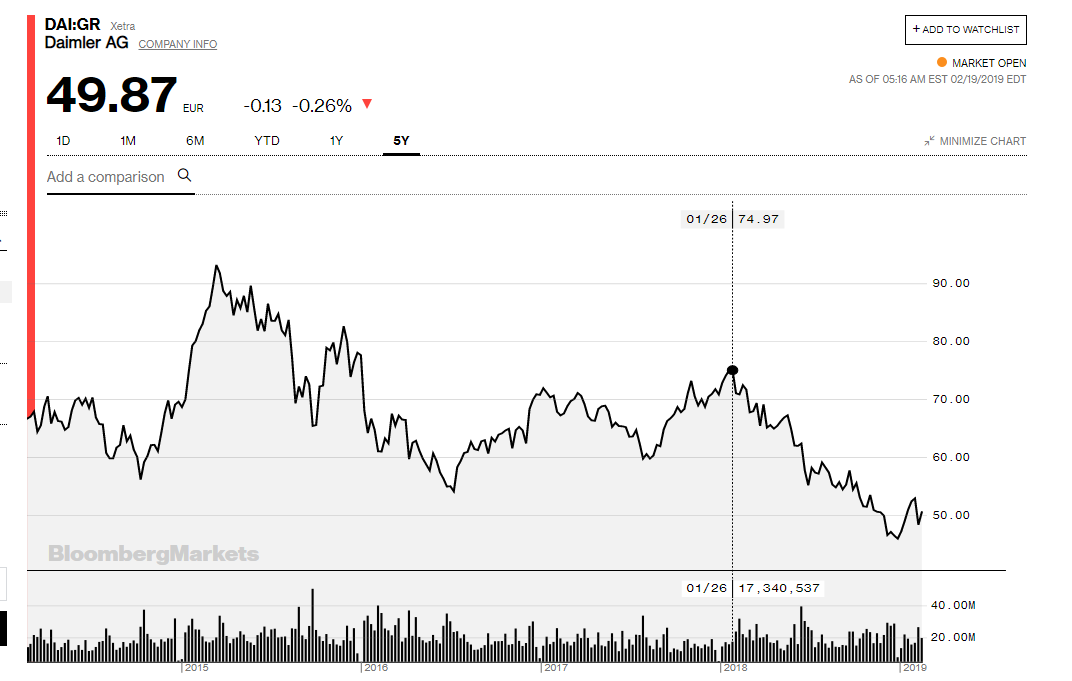 As there are fears of a recession, the stock falls, when the sentiment is more upbeat, the stock is up. Therefore, one has to buy these stocks when there is blood on the streets. However, before buying, one must know what would be a good business price to pay for a decent long-term business/earnings return. Let’s see.

VOW group hopes to increase their return on sales by 1.5 percentage points by 2025. Given sales are €230 billion, it would not be a bad thing.

But, just to stay conservative, let’s say they don’t improve there. On the cash flow, they have their benchmark at €10 billion, a level they can achieve and have been achieving. 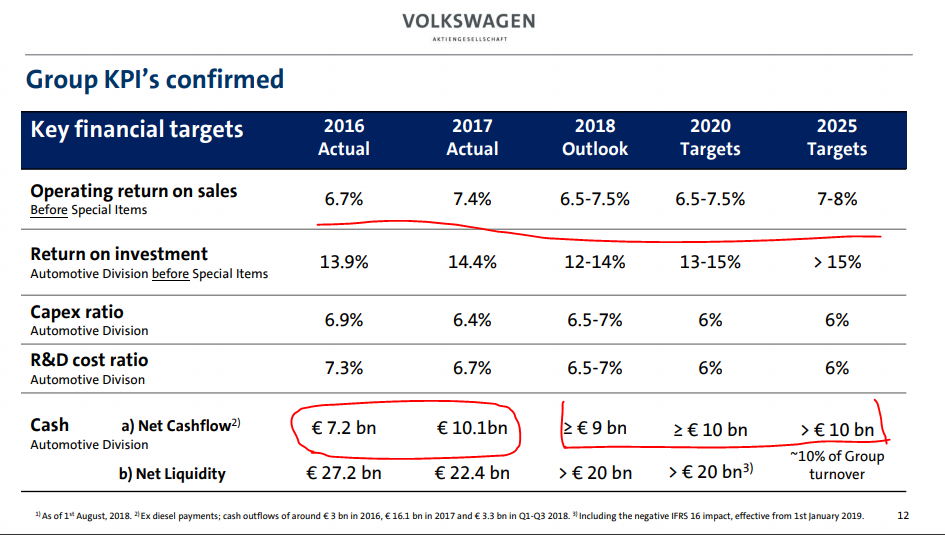 So, in a bad year, cash flows will probably be €0 to €3 billion, in a good year it will be €10 to €12 billion and 8 billion in an average year. In a cycle, we will have two good years, two so-so and one bad. I would say their net cash flows should be around €8 billion per year over the next 5 to 10 years.

The industry is highly competitive so, this is what one should expect. €8 billion on a €70 billion market cap implies a yield of 11%, not bad. I have to see what is the story around the €8 billion in cash flows. In the 5 year strategy plan conference webcast, the finance board member discusses how they expect to reach the 30% earnings dividend pay-out in 2020 and keep that for longer. 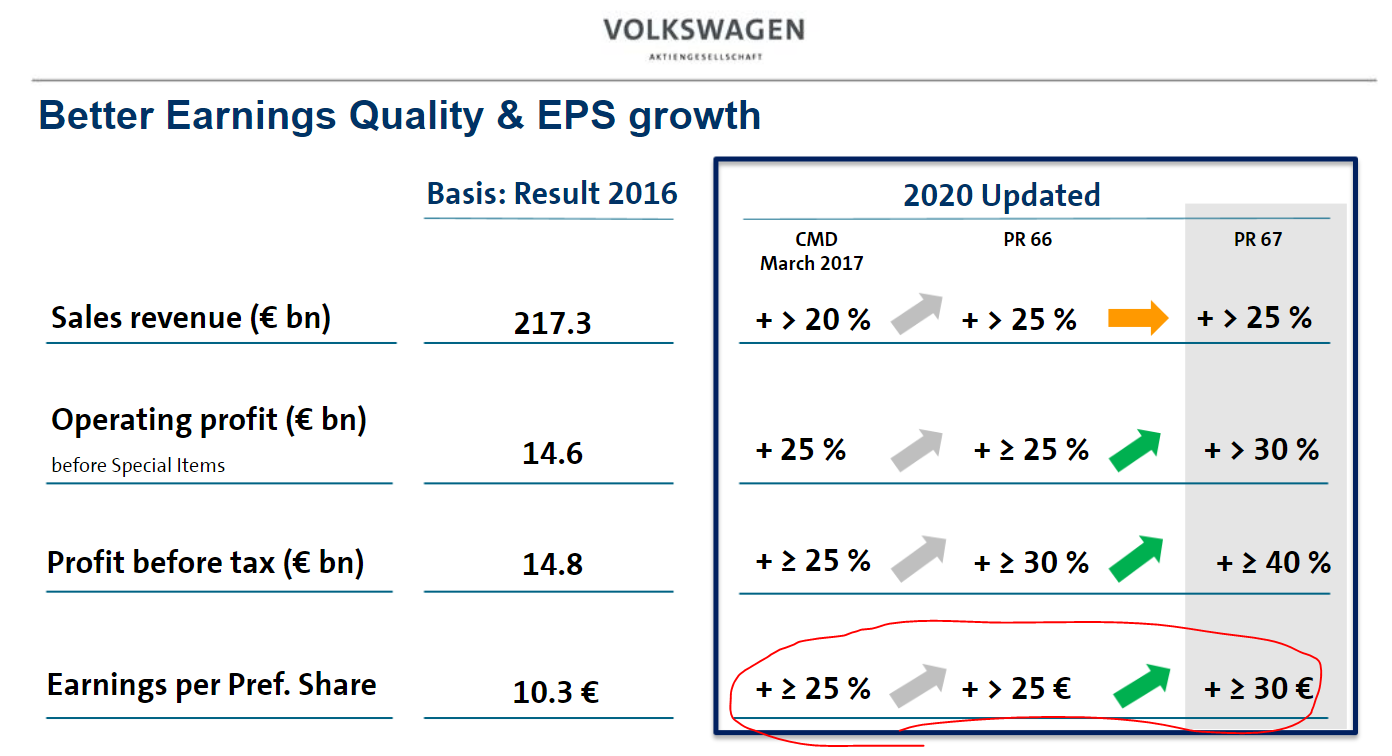 The 7% dividend yield from VOW would be a 9.1% dividend from Porsche. So, this doesn’t come even close to my required 15% return but I’ll give you another perspective.

The market’s perspective on VOW

Remember all the brands VOW has?

VOW also plans to IPO Traton, the truck/transportation division, in April for €6 billion for 25% that would value the company at €24 billion. Let’s say €20 billion. Just Audi and Traton are already at a €53 billion value. 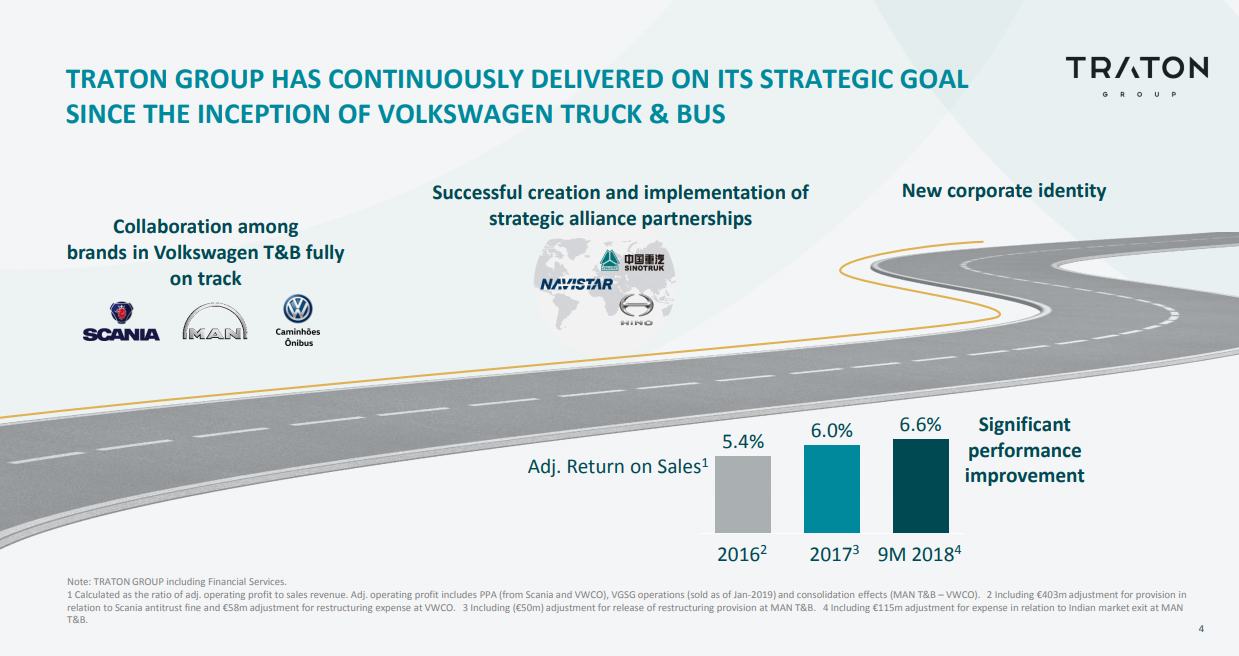 Then we have the car branks and makers; Volkswagen, Skoda and Seat, that should also be worth at least €30, €5 and €5 billion respectively. Thus, we are at €93 billion in total. And, not to forget, Porsche AG, the car maker, not the holding company.

Ferrari N.V. that spun out of Fiat Chrysler a few years back, has operating cash flows of €400 million and a market capitalization of €20 billion. 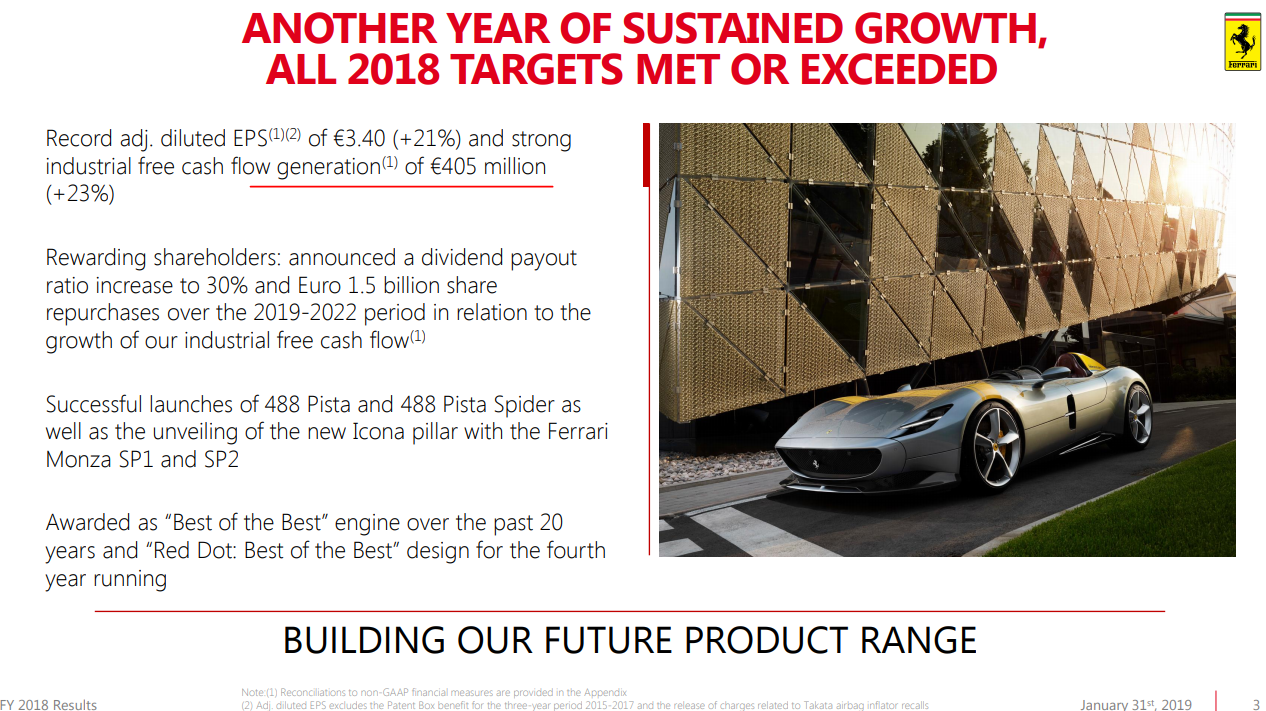 In 2018, Porsche AG had operating cash flows of €4 billion that would leave at least €2 billion in cash flows. Give it a Ferrari valuation and you are at €100 billion, but let’s put is at just €25 billion.

There is then the financial services, another €2.5 billion in operating cash flows that we can set a value of €10 billion on.

Lamborgini, Bugatti, Bentley etc must be worth something too. When I sum things up, I get to €128 billion. That could easily happen as it is all a valuation game. The current PE ratio is 5, bring it up to 10 and the market cap would quickly be €140 billion.

I see where the undervalued perspective comes from, but that is relative value investing and not absolute value investing focused on earnings. There are large liabilities on VOW’s balance sheet, high forward expected investments, where €44 billion will be invested in the EV trend, which make me stick to my yield expectation, where I would love at least an 15% yield, which means VOW, or PAH have to decline at least 50% for me to take a serious interest. Well, perhaps in the next recession, if not we have other vegetables to fry.