McKesson (MCK) came out as a buy within a few value investing funds that I follow, with the largest being Seth Klarman’s Baupost Group. In this report I’ll summarize the risk and reward in an investment thesis and show the value investing perspective on this. Value investing focuses on the value of the underlying business and when the stock trades with a margin of safety to that, it is a buy. So, let’s see what has Seth Klarman been buying.

MCK is a company that distributes drugs, can there be a better business, especially if it is legal? It had $208 billion in revenues in 2018 and operating cash flows of $3.8 billion. It delivers 1/3 of all prescription medicine in North America. 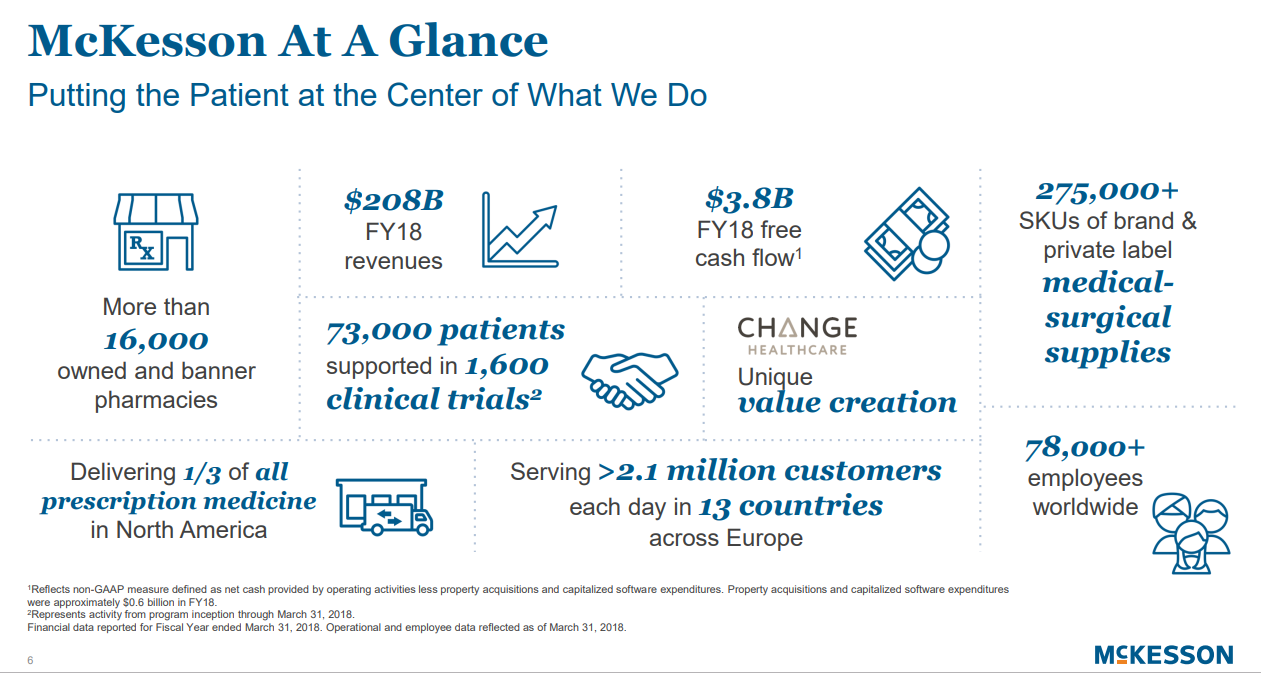 We all know the population is aging and there is nothing that can be done in relation to that. Perhaps an interesting trend to invest in and MCK certainly gives us exposure to that. We have to see how big of a moat their business has and whether, and how much, it will be affected by the various Amazons etc. entering the field. 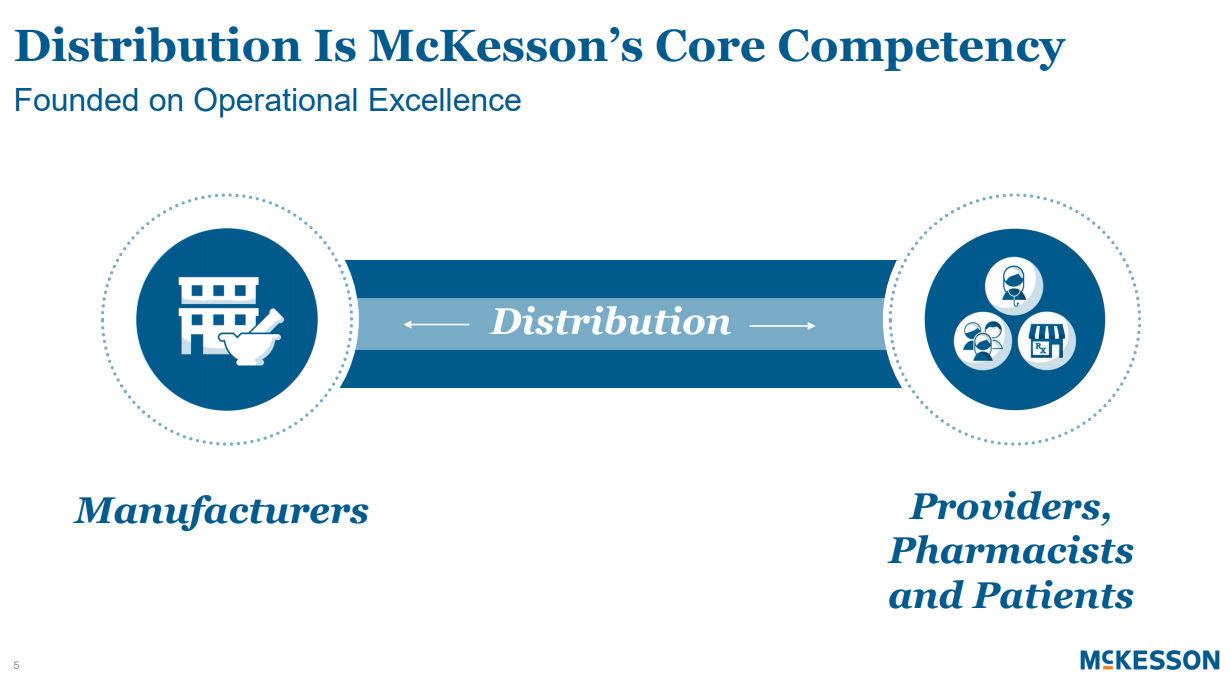 It is important that they can invest in growth but also reward shareholders, we will see later about the return on capital.

But before, let me compare the bull and bear thesis.

The main investing thesis is that the stock has declined from a high of $240 to the current lows while the business fundamentals haven’t changed. 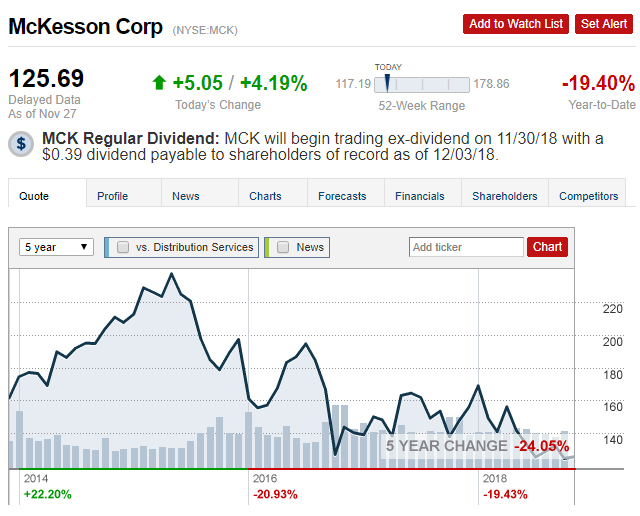 On the fundamental side, revenues have been growing steadily and doubled over the past 10 years (line 1). Gross margins and operating income have been relatively stable while the dividend has tripled (line 2). Alongside dividends, the company had extra cash to do buybacks as it lowered the number of outstanding shares by 27% over the last 10 years (line 3) but at the same time it doubled its book value (line 4). Operating cash flows have been increasing (line 5) while the business doesn’t really need much capital to grow as the capital spending is just 15% of the operating cash flow or less (line 6). All the above brings to lots of free cash flow that can be used to reward shareholders (line 7). From this point of view, MCK has all the characteristics of a great business.

This means that if we assume MCK to have the same business results over the next 9 years as it has had over the past 9 years, investors would get their money back in 9 years and still, after 9 years, own the business.

I’ll use Netflix (NFLX) as an example of a company that has negative free cash flows and that is not able to reward shareholders. It is definitely an exciting stock, offering huge growth, but the business model is not amazing and it is not a cash producing business yet. Value investors prefer boring, cash printing businesses, and avoid exciting growth stocks. 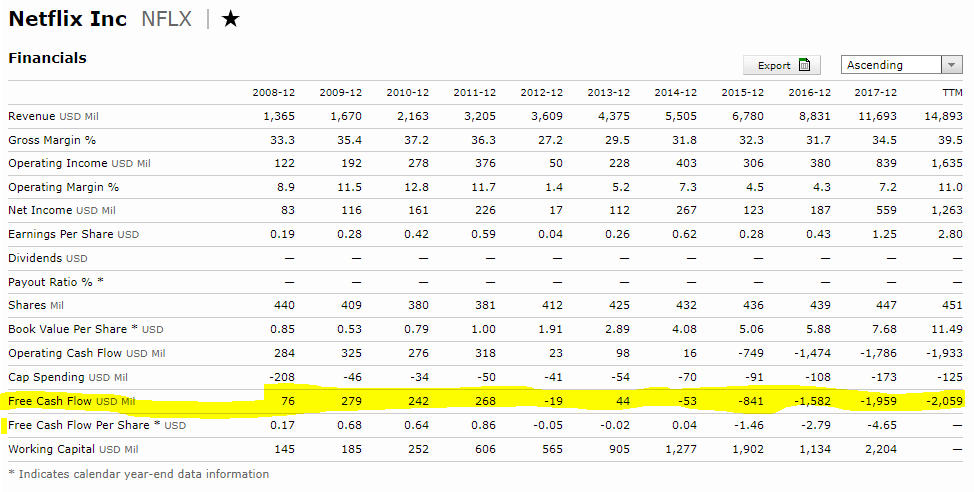 Another positive for MCK is its scale, owning 1/3 of the medicine prescription market in North America is a big deal. It has contracts with CVS Health mail order, Walmart, Albertsons etc. Further, 3 companies control 90% of the pharma distribution market. MCK, AmerisourceBergen (ABC) and Cardinal Health (CAH). It would be extremely costly for new entrants to build what these 3 companies have built, their distribution networks, warehouse efficiency etc.

When it comes to great businesses, return on invested capital is key. MCK has had a ROIC of around 12% over the past 10 years. If the company continues to do that, you can expect its value to compound at that rate. The funny thing is that by investing at the current FCF valuation, you are close to paying a fair price for this.

Total shareholder returns in 2018 have been $1.9 billion. On the current market cap, that is a yield of 7.7%. This is what you can expect in the future if the valuation remains where it is. But if the ROIC continues to be at 12% and the growth continues, that can only grow.

MCK’s long term debt is just $8 billion on which is ok on $3 billion of operating cash flows per year. 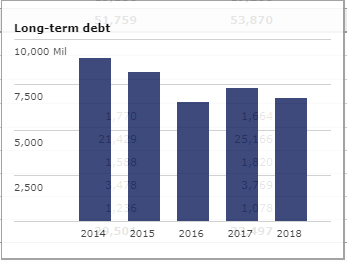 Despite the buybacks and dividends, the book value has doubled over the past ten years and is currently at $47.73. With $13.16 of free cash flow per share, the return on book value is a staggering 27%. Compound that over time and we can only imagine where will MCK lead shareholders if things continue as those are now. However, there must be something wrong with the company too, if not the stock price would be at $240 as it was a few years ago.

There have been some headwinds lately that have put pressure on the business and consequently on the stock. As Walgreens acquired half of Rite-Aid’s stores, MCK lost part of its revenue and there have been major pricing pressures in the industry that have affected MCK’s profit growth.

Further, the complete drug industry is shifting and there is more pricing pressure from payers. It is inevitable that MCK will feel the pain of this industry trend but, as with any other business, there are always risks, if MCK manages to mitigate those risks by increasing efficiency and cost savings, it will continue to do well for shareholders.

Two other concerns are Amazon (AMZN) and the opioid epidemic issue. We know what has Amazon been doing to retailers over the past decade and when a player like that acquires a company like PillPack, it is a good time to be concerned. 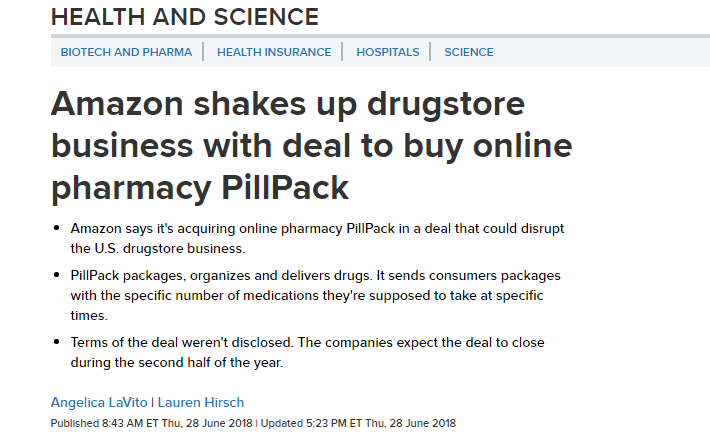 The market significantly reacted to the above, but we have to keep in mind that PillPack had revenues of $100 million in 2017, which is not much compared to the $208 billion for MCK.

Now, let us assume the worst-case scenario, that AMZN becomes a big player in the industry. How long is it going to take it to become a significant player there? We have seen it acquire Whole Foods but did it immediately impact other grocery stores and their business results? Of course not.

Further, the population is aging, both in the US and in Europe where MCK acquired German drug wholesaler Celesio in 2013. So, let’s say AMZN takes 3% of the market year by year over the next 10 years. In will end up owning 30% of the market, however, we can expect the market to unfortunately grow at 5% per year. 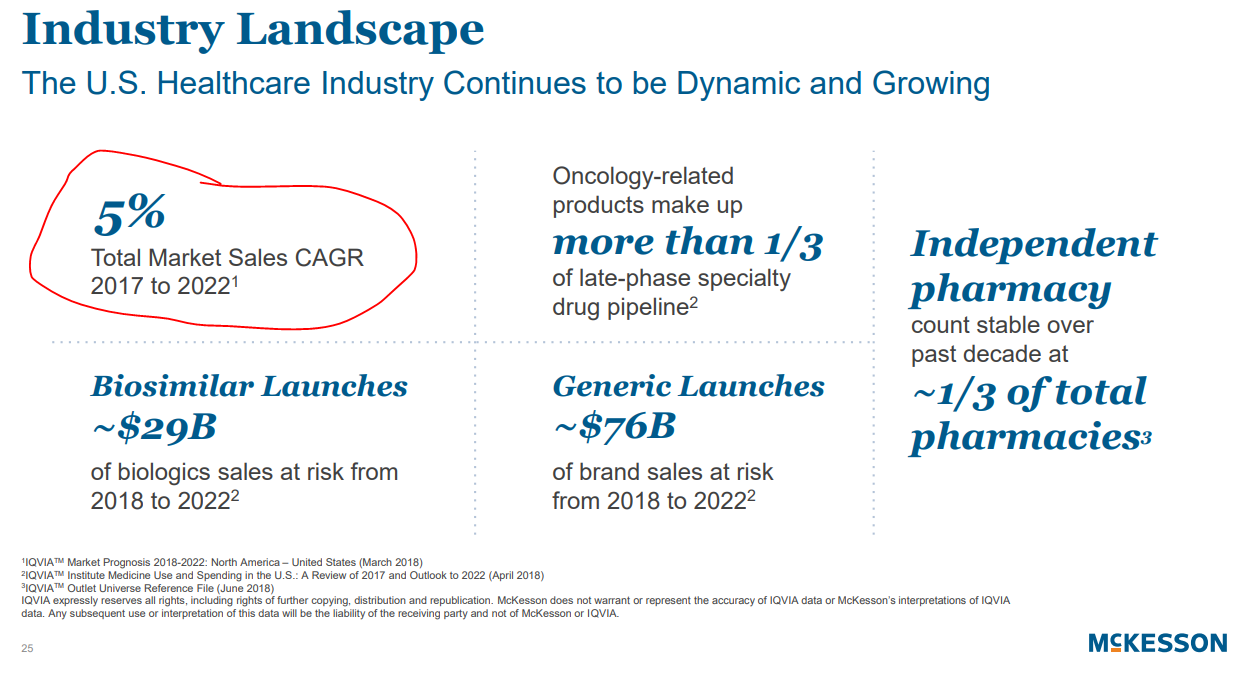 So, MCK could end up growing at 2% per year even if AMZN becomes the dominant player in the industry. However, the market’s growth is an issue that is also putting pressure on MCK due to the opioid epidemic. Before discussing that, let’s say that MCK doesn’t grow at all over the next 10 years. This would mean that its free cash flows would be around $25 billion, what is the current market capitalization. Whatever value is left after 10 years, it would be a bonus to those who invest in MCK today. And that is why value investors have been buying MCK, the cash flows are the value while the future potential is the margin of safety. In case of further stock price declines, someone would probably snap it and bring it private.

If you are an opioid distributor, your goal is to sell as much as you can. This can create a distorted picture of what is actually good for the patient or not. The Daily doses of opioids in the 20 most populous countries shows a staggering statistic. If the US or Germany would fall to the Japanese average, revenues for MCK would decline significantly. 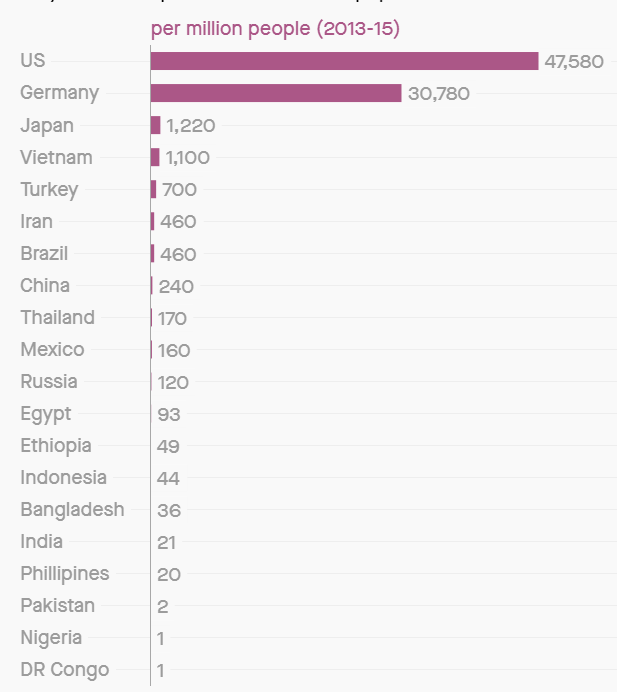 Just as a note:

Source: The Lancet Commission on Global Access to Palliative Care and Pain Relief

I am personally fortunate that since my wife has taken care of my nutrition over the past 7 years I have not taken any kind of pill. So, if my wife gets famous, that is another risk for MCK.

Conclusion – what to expect from investing in MCK?

I really don’t like the big pharma and the way they go about promoting what they make. If the same amount of money would be spent to promoting eating broccoli, people would live much longer. However, I also have a responsibility to show the best risk reward investments out there to my investment community and consequently also invest in the best businesses out there.

When it comes to what to expect from investing in MCK, the first thing we have to keep in mind is the 7.7% investors yield in the form of buybacks and dividends. Further, the capital that gets reinvested will probably yield 12% and the market will grow probably at 3 to 5%. This means that MCK’s revenues will probably double in the next 10 years and profits too. This would bring the stock to double over the next 10 years in addition to giving you a yield of 7.7%. The return from the stock doubling would be 7% that in addition to the 7.7% shareholder yield gives you a return of 15% per year if it remains business as usual for MCK.

If the market calms down, the current concerns become mere overreactions, and the price to cash flow goes to 15, the market cap could quickly jump to $45 billion which implies an upside of 87%.

On the downside, there will probably be some fines, more negative sentiment etc. That might put significant pressure on the stock but not on the long-term business, something to keep in mind.

Am I going to invest?

I am going to look at it a bit deeper, listen to the conference calls, see about my negative feeling for the pharma sector in general and then also compare it to other potential investments.

If you liked this analysis please subscribe to my newsletter where I sent a weekly email showing what content has been published. I am sure there will be something interesting for you every week.