Three extremely important pieces of information released over the last weeks for investors are:

The turkey is born, and fed more and more each day. The turkey thinks everything is perfect, food is coming in larger and larger quantities and there is absolutely no risk. As the days go by, the turkey’s wellbeing constantly increases. You can read more about Black Swans and turkeys in my Nassim Taleb articles. 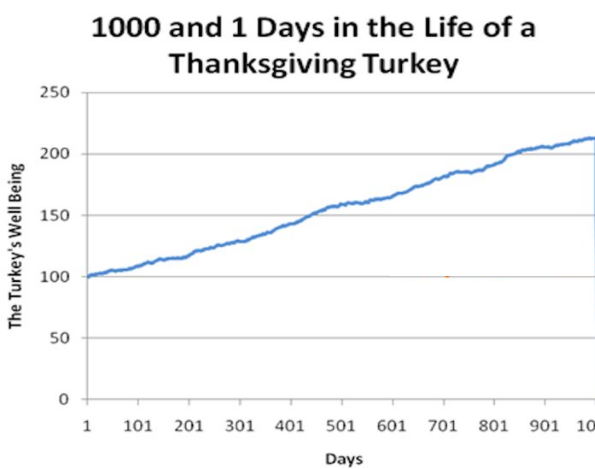 Similarly, governments think they can spend money and not care about deficits. The central bank heads will do whatever it takes to keep things going well by printing more money and we, governments, corporations etc. all feel like turkeys. Think about it, aren’t you feeling good like a well-fed turkey and your wellbeing is constantly increasing?

There is only one minor issue, at some point in time, the butcher feeding the turkey, decides to prepare it for Thanksgiving. Similarly, the money printing game will end, it has happened a thousand times in history and currencies always debase, i.e. lose their value. 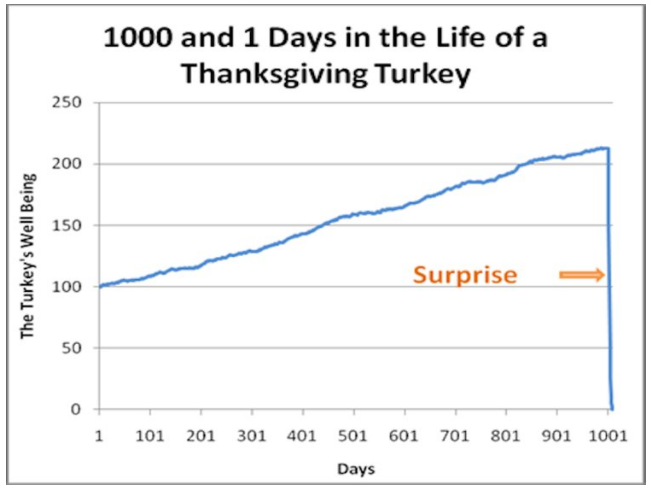 The key here for investors is not to be the turkey. Let’s start by explaining the economic fundamentals, the financial engineering provided by central banks and then conclude with how to invest so that your portfolio doesn’t end up like a Thanksgiving turkey.

For me, one of the most important pieces of information over the last weeks was the ballooning of the US budged deficit. 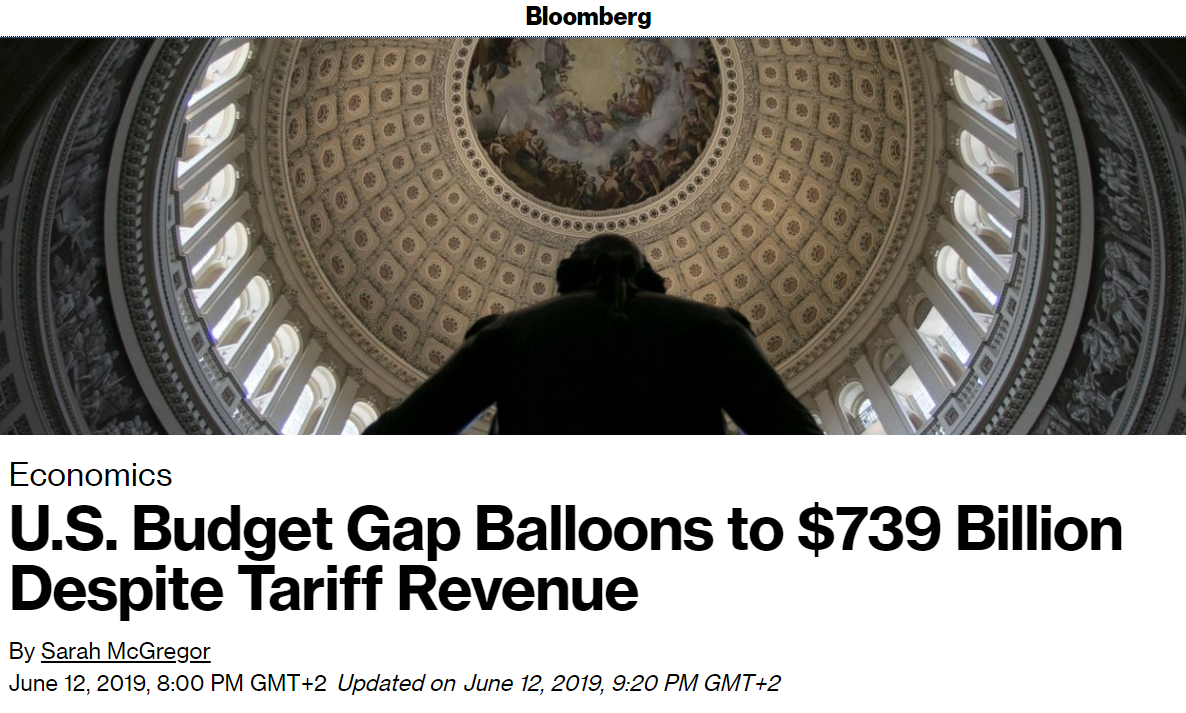 If we look at what the Congressional Budget Office has to say, The Budget and Economic Outlook publication shows how the US budged deficit will be larger than $1 trillion per year very soon.

This means that the US total public debt will continue to grow at extremely fast rates. 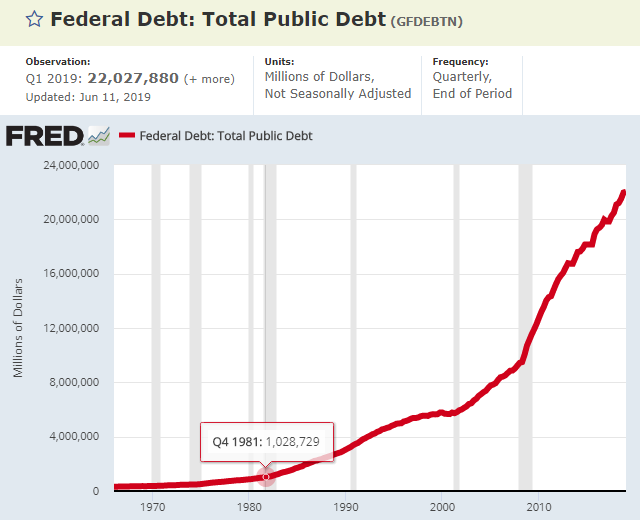 The public debt is now 22 times higher than what it was in 1981. From my point of view, spending more than what you make can only last for a while, but sooner or later the butcher will come. Now, I know interest rates are lower and the debt cost servicing isn’t high, but interest rates can change if central banks lose control and history teaches us; sooner or later, central banks always lose control.

Given what is going on with governments debt levels, corporate debt levels and even household debt levels, central banks have no other option to keep interest rates low, practically at zero, and promise to print as much money as necessary when necessary.

So, we have the FED saying how it will cut rates to sustain economic growth. 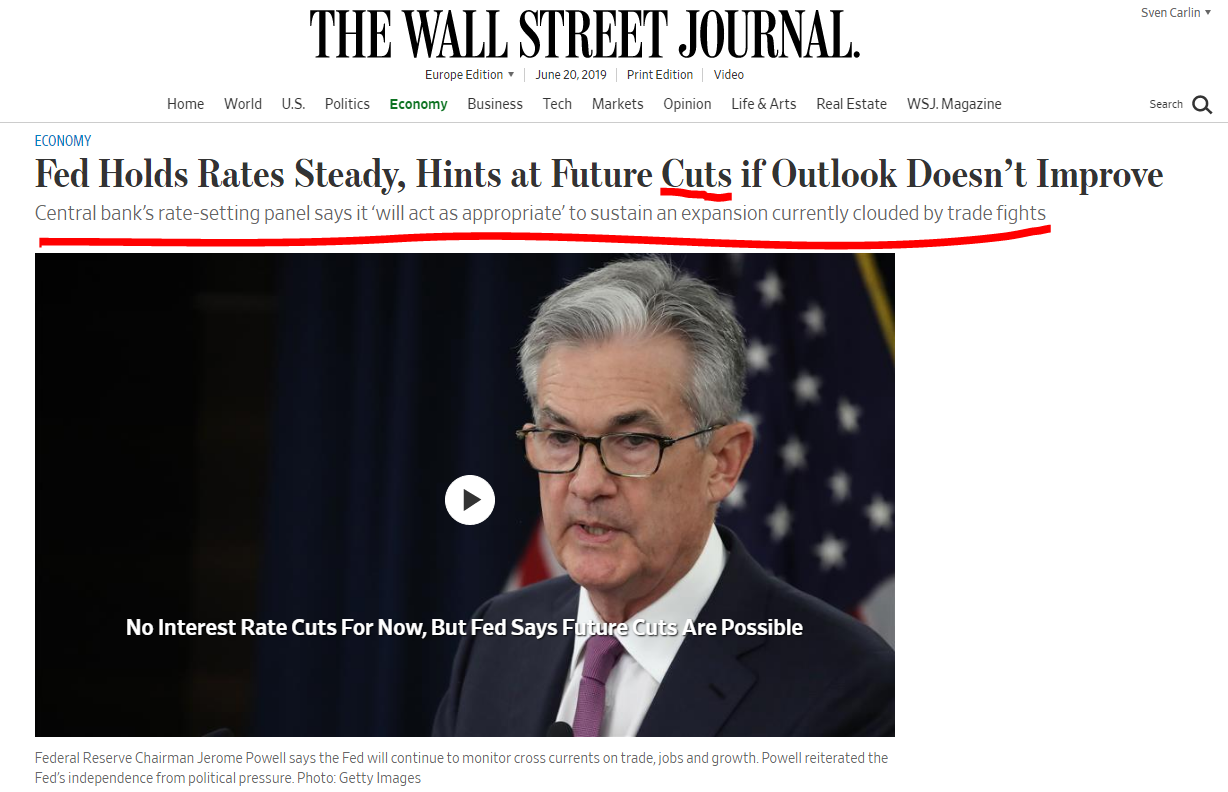 And we have Mario Draghi practically saying how the ECB will do whatever it takes to stimulate the economy.

My conclusion is that over the longer term, money will be printed and currencies debased or better to say sacrificed. Economies and businesses will be stimulated but sooner or later this too will pass. We have to be very careful, not to be the turkey.

If everybody has a lot of debt, especially governments, it means all policies will help the majority, i.e. those with debt. So, let’s say you have a 30-year mortgage with a fixed interest rate of 3.5% like I have and let’s say currencies lose 50% of their value over the next decade due to inflation. This would mean that the value of your house would go up 50%, your salary too, while your mortgage payment would remain the same. 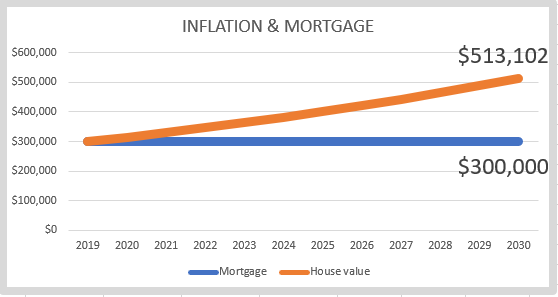 You are practically playing the same game as governments.

Secondly, the ECB and the FED say they will buy assets, which means the value of financial assets will continue to go up as it did in the last ten years. I would not be surprised to see the S&P 500 at 5,000 points with index fund investors not happy about it.

If we see inflation, which is very likely to escalate somewhere in the future because it is never linear and the FED and ECB will lose control, especially the ECB that doesn’t have any kind of coherence within. Everybody is happy to get free money from money printing, but when things get ugly, we will see for how long will Europe last.

In 1961 it looked like there will be no inflation to worry about given that inflation was at 1.2%. However, over the following two decades, inflation was often above 5% and peaked at 13.5% in 1980. 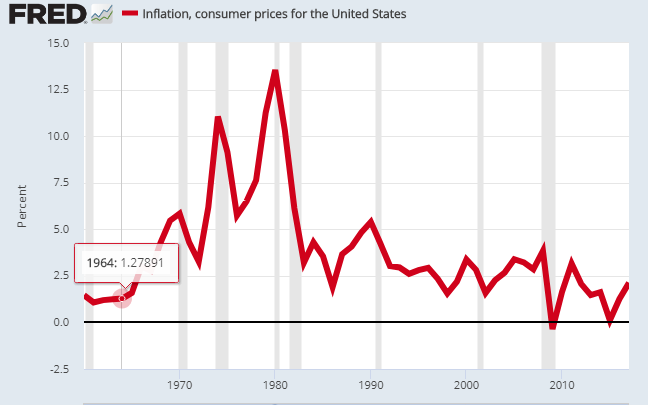 My point is that by focusing on value investing, like Warren Buffett did over the last 50 years that have had significant inflation, you can do better than what the S&P 500 offers even if it doubles in the next decade. 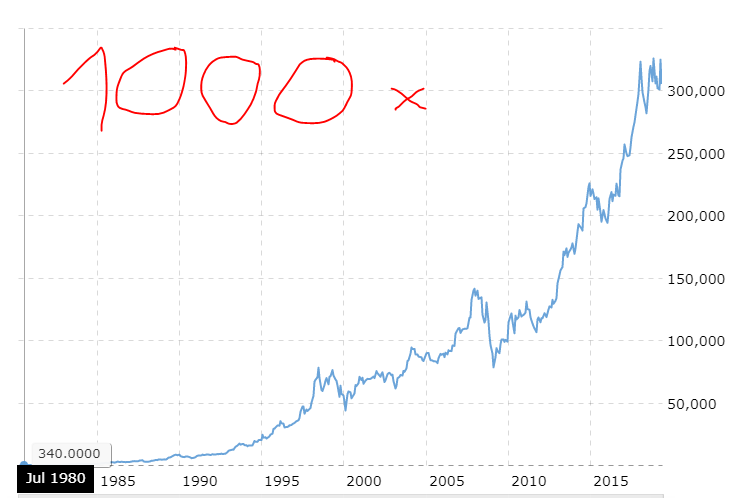 The difference comes from the focus on businesses, that have moats, have pricing power and can consequently adapt to inflation. Therefore, when investing, and you have to be invested because currencies will be worthless, focus on buying value, businesses that will do good no matter what. Thus focus on risk and reward, exactly what value investing is.