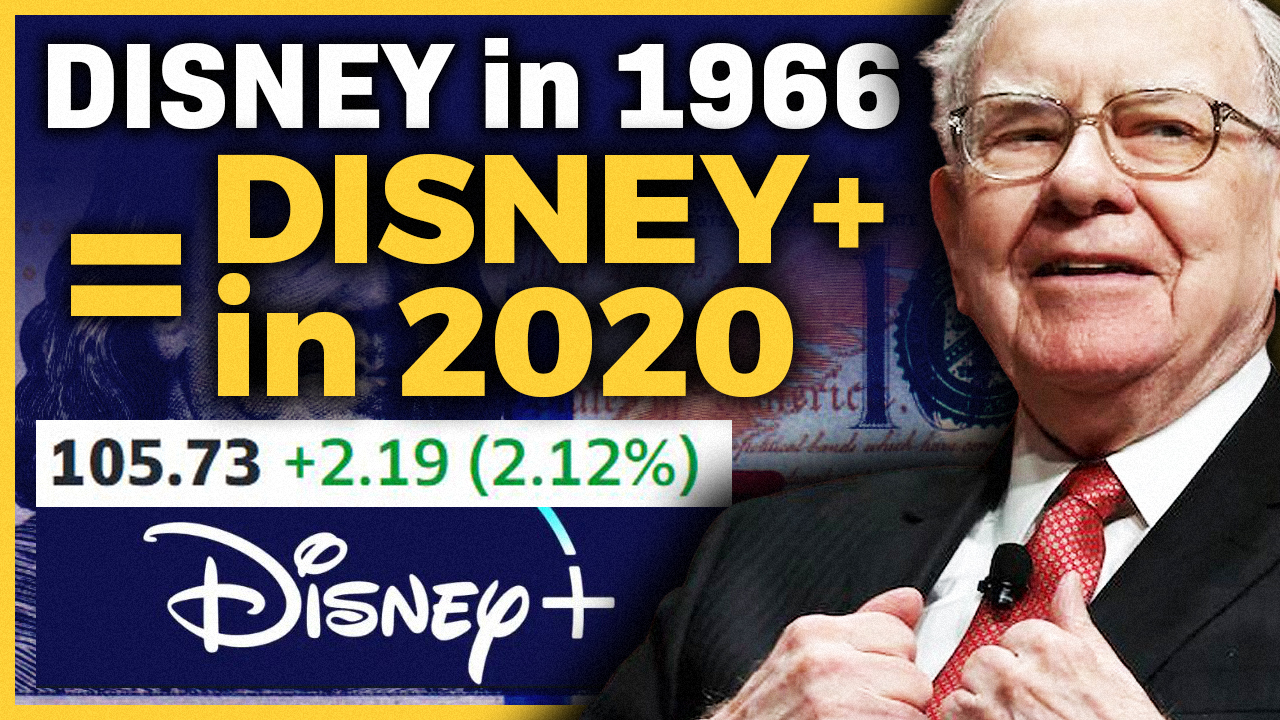 Disney Stock Analysis – A Warren Buffett 1966 Déjà vu – you pay for Disney+, you get the rest for free!

In 1966, Warren Buffett, then 36 years old, bought a 5% stake in Disney (DIS) after visiting the company and having Walt Disney show him around. The market capitalization of the company was $80 million with no debt while the cost of just a new ride they were building was $17 million. Buffett quickly summed up the cost of the other rides and attractions in the park and figured just the value of the park covers for the market capitalization. The rest; all the movies, brands, future growth etc. came for free.

Buffett bought $4 million of DIS for a 5% stake and sold after 12 months for $6 million and a 50% profit. Today, 5% of the company would be $9 billion for an annualized return of around 15% on the 6 million and around 16% on the $4 million. (this is why Munger often discusses that the price you pay doesn’t really matter if you buy a good business, 15% or 16% per year doesn’t change much).

However, the company did some buybacks since 1966, paid a dividend and therefore the return would be much higher than the 15%. Probably in line with Buffett’s historical return of 20%. So, not really a mistake for Buffett, even if at first it seems like one.

Nevertheless, we are in a similar situation today, the value of just one part of the business, Disney+, is close to the market capitalization. So, you get the rest for free!

Part of the Disney empire – Source: The Walt Disney Company

I analyzed Disney stock a year ago and my conclusion was Netflix (NFLX) has just set the stage for DIS. Given the latest news on Disney+ with the number of subscribers reaching 50 million, it seems to be the case.

On fundamental returns, investors should expect returns from Disney between 6% and 14% over the long-term in a stable environment, depending on  future growth. Fast forward 14 months and you have an unstable current situation alongside good potential growth ahead thanks to the digital platform. Time to take another look.

Disney is a popular brand, but it is always good to summarize what it all is:

Disney had a great 2019 with record park visits and box office gains that led to 17% revenue growth.

Given the current situation, we can be certain 2020 won’t even come close to 2019. We can estimate parks to remain closed for 2020 and not recover in 2021. Thus, hitting parks revenue 50% in 2020 and at least 25% in 2021 when compared to 2019. We can expect something similar for studio revenues as theaters remain closed. Media networks should be hit hard too as advertising budgets are being cut. I see that myself as ad revenue on my YouTube channel is down 50% over the last few weeks (note: YT advertisement proceeds are donated to charity). However, streaming services growth should be staggering given the 50 million subscribers reached extremely fast over the last months.

If we assume a 25% hit to Media Networks, 50% hit for Parks, 50% for Studio and 100% growth in DTC, we end up with revenues of around $50 billion for 2020. I would say operating income will be at zero given the positive factor that most of DIS’s costs are from labor, COGS and other related operating costs that aren’t there if things aren’t operating.

A look at fundamentals shows that DIS made $11 billion in 2019. On the current stock market capitalization of $180 billion, that is still a return of just 6%.

If I assume Disney+ to reach the same level of revenue as Netflix currently has over a few years, that would add another $20 billion to the above top line. Then DIS’s revenue would be at $95 billion and if we add 5% growth from all the future potential the brand offers, we would soon be beyond $100 billion in revenue. On similar gross margins, the company could make between $16 and $20 billion in profits by 2025. That would already give you a business yield of 11% in place of the current 6%.

If the company keeps the current valuation, the stock price should be 80% higher. That would imply a 12% return over the next 5 years. Not bad for a great business like DIS is. However, the investment thesis is based on valuation and growth. In order to reach a 12% yearly return we have to assume things get back to normal, DIS grows 5% per year and the valuation remains equal. That is likely to happen and from 2025 onward you would have an 11% return on your cost and again a 6% return coming from earnings, but you never know.

If we make a comparative valuation with Netflix, the value of Disney+ should cover for the market capitalization while the rest, even the content creation that Netflix has to pay for, comes for free.

Given the performance Disney+ showed since the launch in November, it is likely the service will soon reach Netflix’s number of subscribers. NFLX has a market capitalization of $174 billion and DIS of $188 billion. Thus, on a relative valuation, you buy the streaming service and you can everything else, the media, the studios, the historical content, brand, parks, hotels etc. for free.

I wonder whether in 50 years there will be investors saying how valuable Disney was in 2020; “you could have gotten it all for just the price of the streaming service”.

Disney is a great business with a strong brand, no doubt about it. However, the valuation is in line with the quality and therefore you have to think about how to play the relative and absolute valuation. See how the absolute valuation that leads to a return of between 6 to 8% from a business perspective fits your portfolio and how the relative one, leading to a speculative return between 10 and 15% depending on the variables we discussed fits the speculative part of your portfolio. Be ready to sell the stock when it is overvalued and buy when it is undervalued in respect to what is a good business yield for you. Given the volatility and hardships in valuing intangible businesses like Disney+, it is likely the stock will volatile going forward.