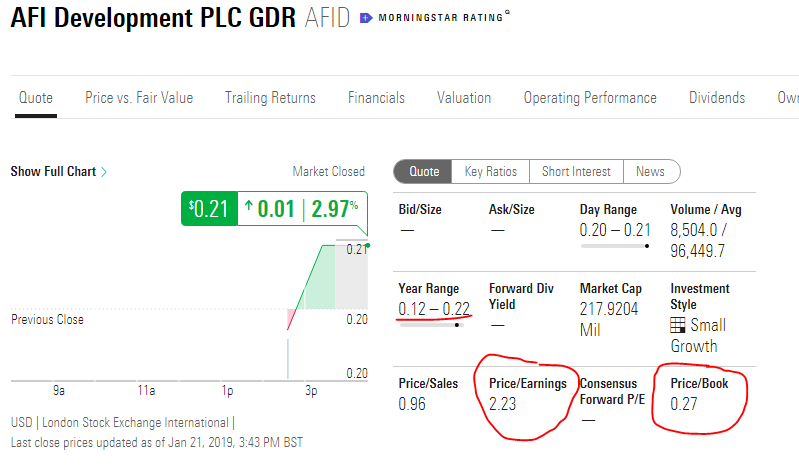 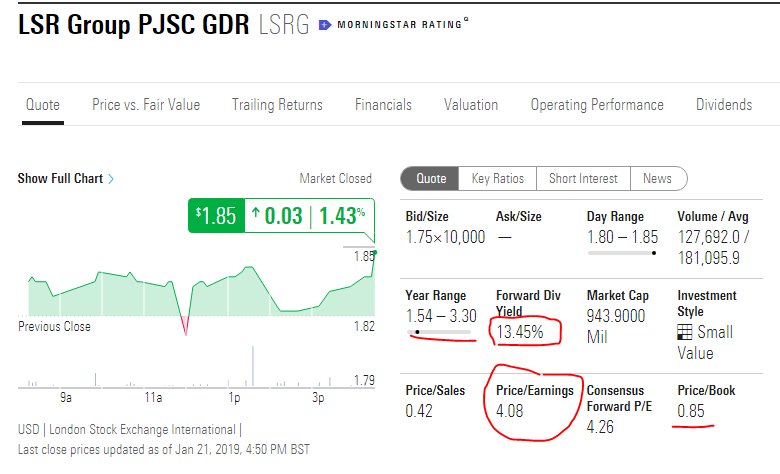 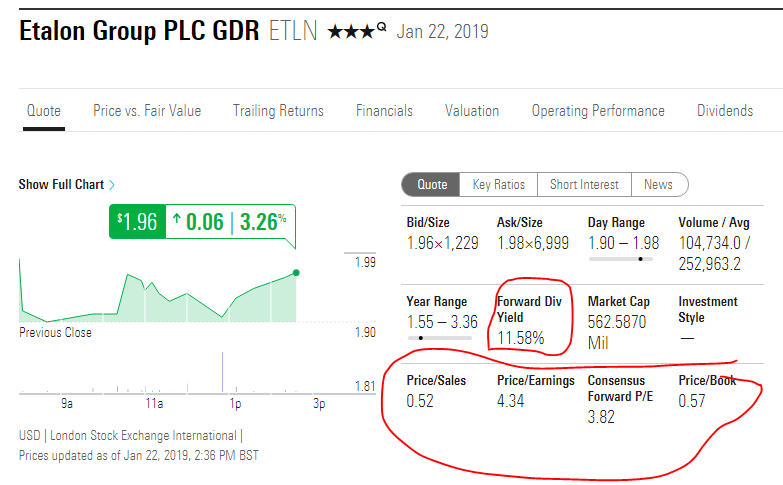 Let’s take a look at their business models to see whether the risks justify the valuations.

If you look at book value, it all looks extremely valuable with a net book value of $822 million on a market cap of $222 million. Total debt is $532 million while total assets are $1.5 billion. The bulk of the loans is for the AFI mall. 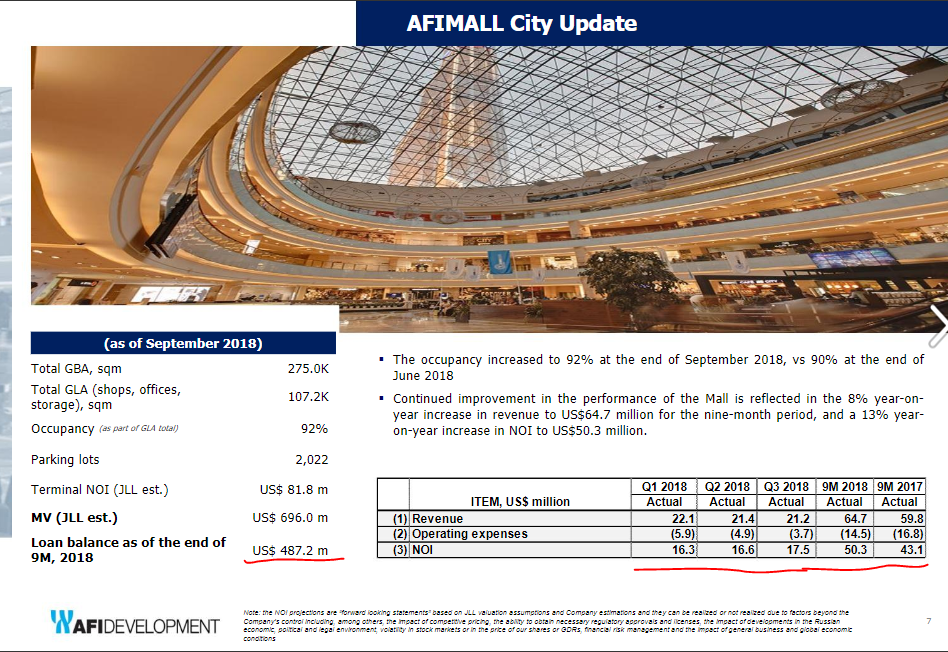 However, a look at the income statement shows how most of the gains come from estimated revaluations on investment property. 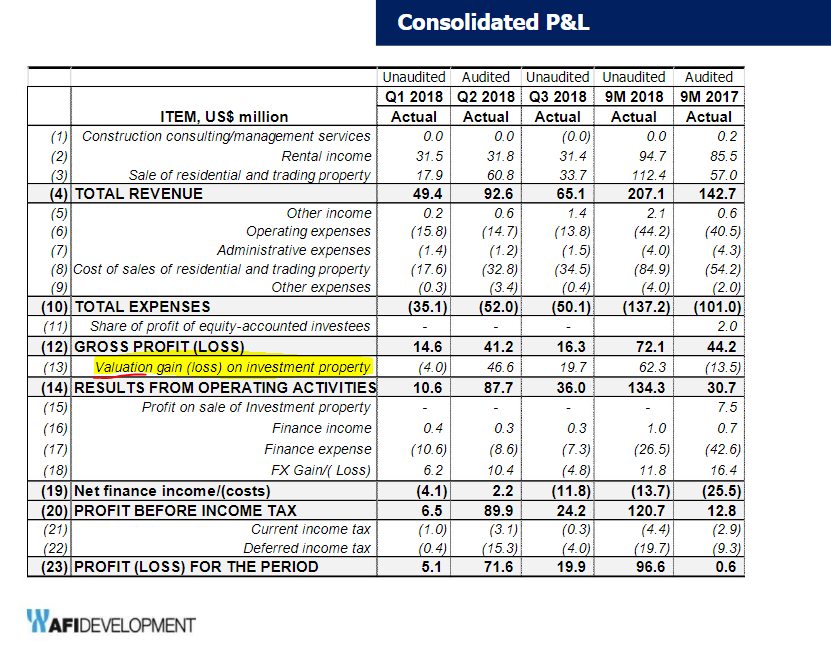 Without those gains, that might be there or not, because you only know what is the value when you sell something, profits would be $30 million for the first 9 months of 2018. Further, the market isn’t hot at all in Russia anymore as mortgage rates have started to go up again. 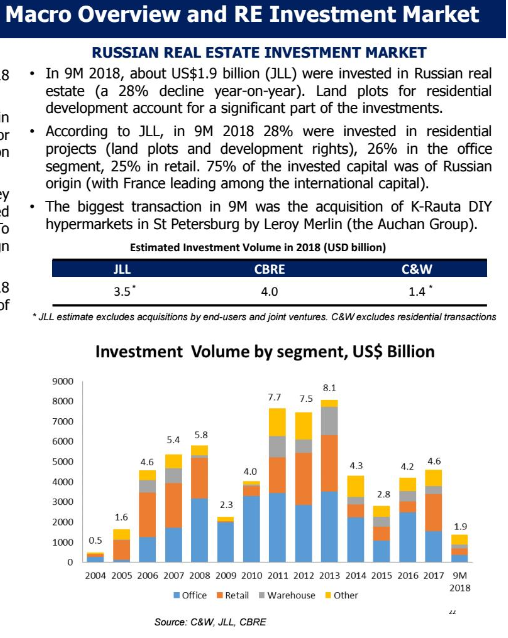 As oil prices decline, you can expect even slower investments, the mortgage system isn’t really developed in Russia and therefore the cheapness.

AFI’s rental income is $100 million approximately per year, finance costs $40 million and you get gross profit of $60 million that covers other costs. As nobody knows what will happen to the inventory as demand slows down, it is hard to estimate the value of the stock here.

It is all about the management’s intentions, there is not dividend in sight, you never know whether they are going to build more even if there is a slowdown, also mall revenues are going to fall, and that is actually a tough and highly competitive business in Eastern Europe as malls are being built all over the place.

The Group expects more than 770k square meters to be completed in Q4 2018. 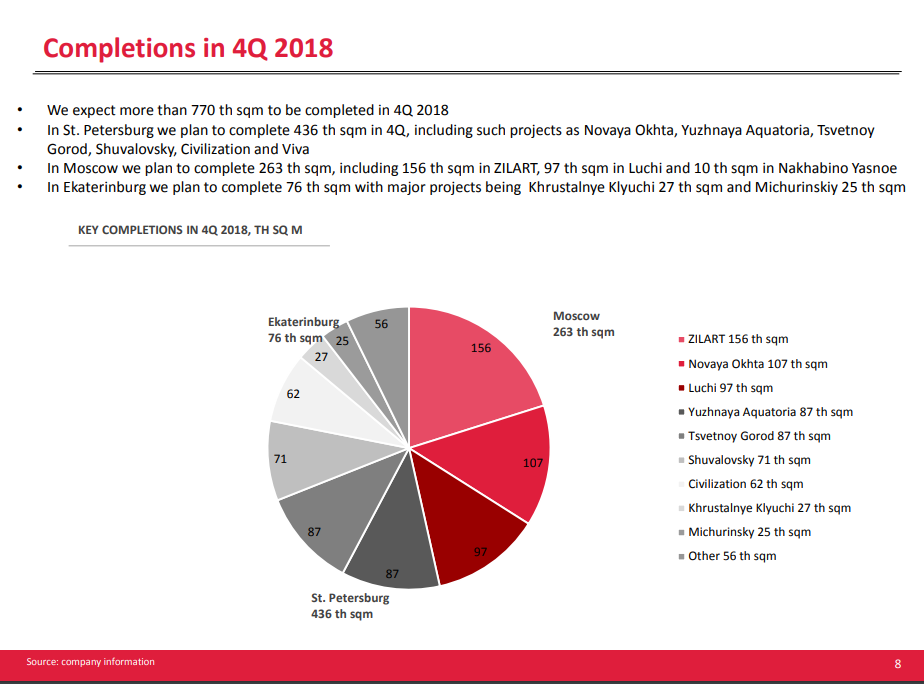 LSR has a nice dividend of 11% but if interest rates go up and the Russian economy slows down just a bit due to lower oil prices, LSR might be in trouble due to the high leverage to macro factors.

Etalon is really diversified across Russia. 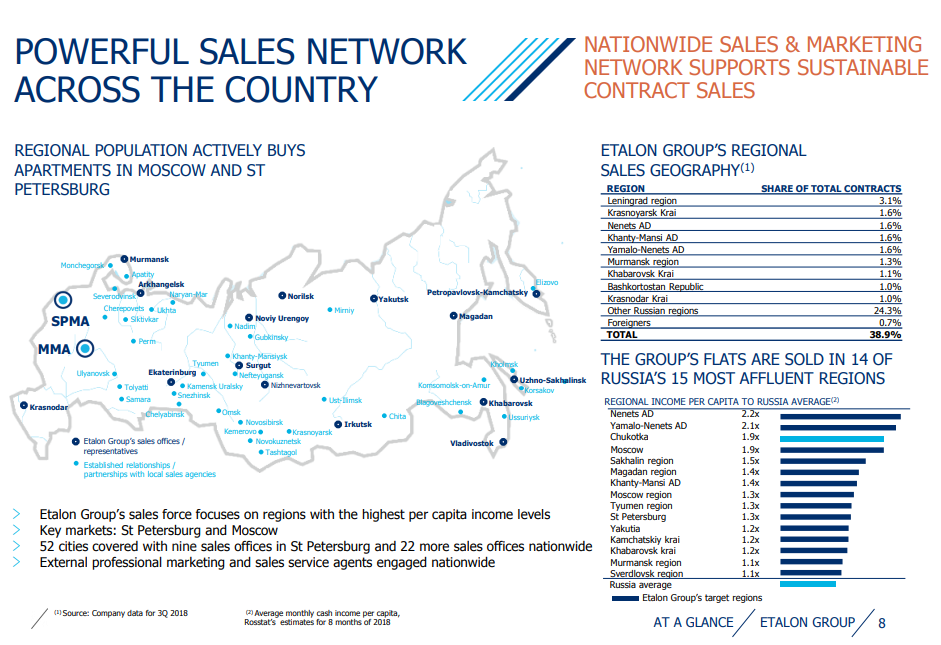 It has similar fundamentals to the other two stocks we discussed.

The market is really highly competitive as the top 10 developers own only 57% of the market. 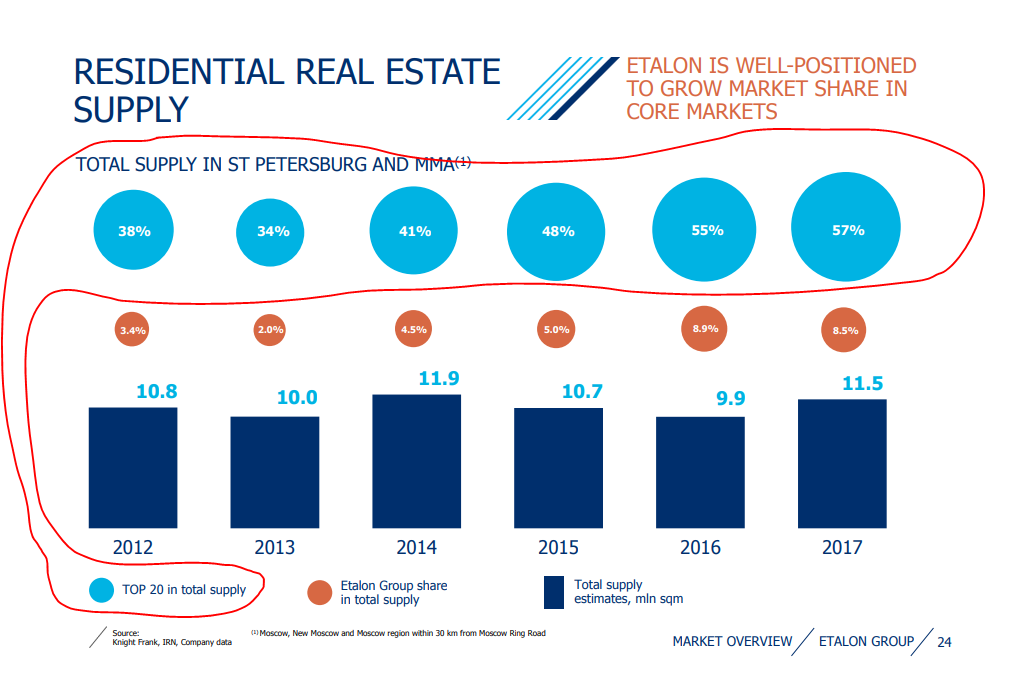 These guys are actually going for an acquisition in the current market to replenish the company’s inventory after great 2018 sales. Plus, one-off factors impact materially net income, they have been issuing debt to pay a dividend in 2017, 2018 was better the opposite but still a lot of questionable things.

If you take a look at the operating cash flows of Tol Brothers over the last 10 years you see those are extremely negative in a downturn and extremely positive in an upcycle.

The same thing holds for most real estate developers. So, if one wants to invest, it is better to invest at the bottom of the cycle when cash flows are negative and people discuss bankruptcy.

When it comes to Russian or Chinese real estate developers, same story there, invest at the bottom of the cycle.

But here it looks like the stock prices are at the bottom of the cycle but not the businesses.

The key in Russia are actually interest rates, which have been going up and are pricing out a lot of the population for mortgages. 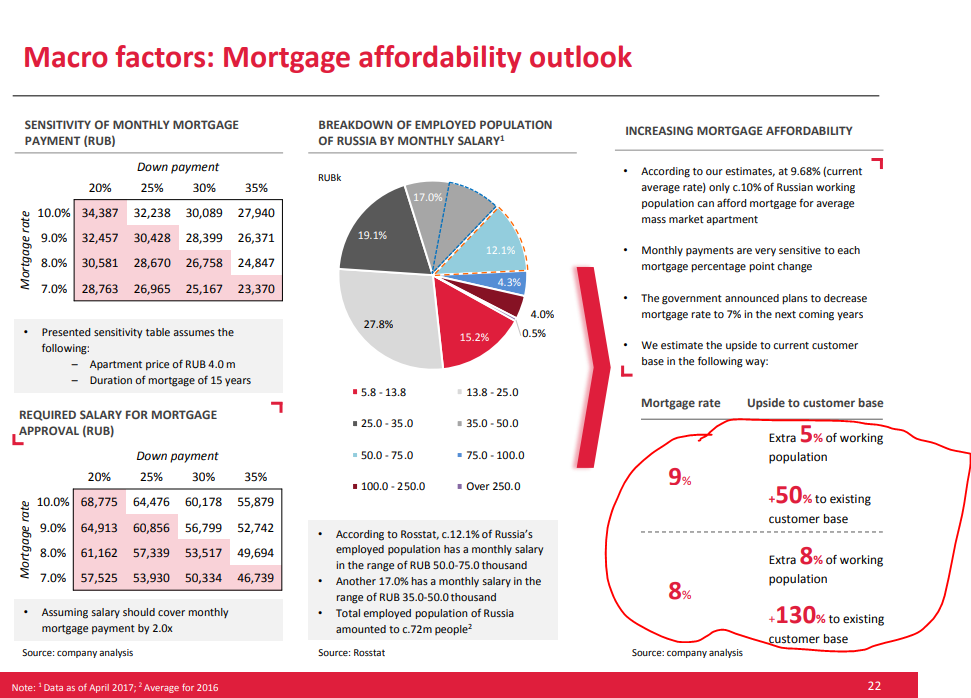 With the bank landing rate going up, it is unlikely we see a mortgage rate of 8%.

So, this is not a business you can just buy and forget about it, albeit LSR’s  and Etalon’s dividends are interesting in rubles. 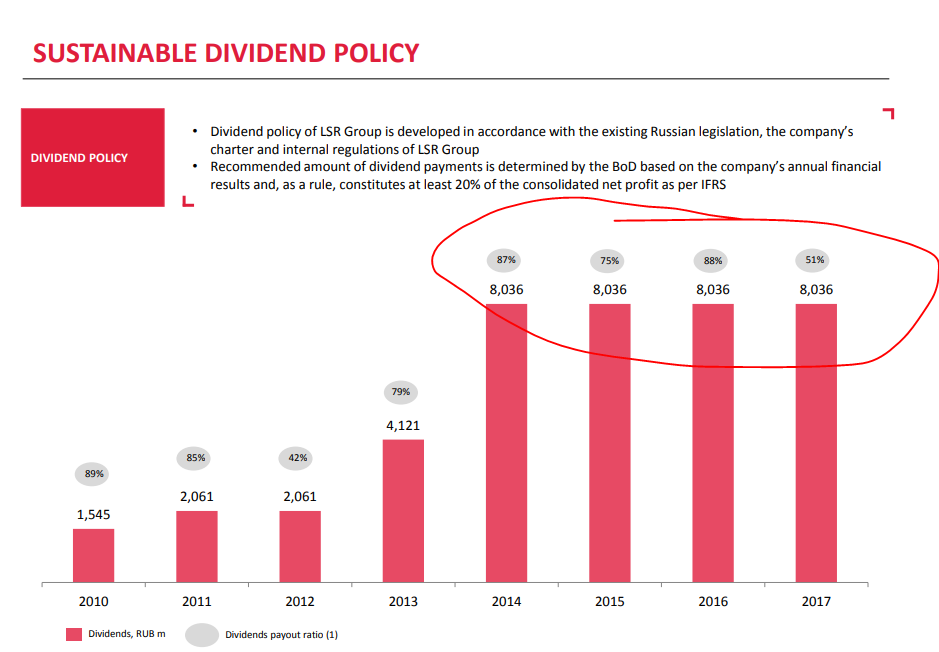 I don’t like these leveraged plays even if there seems to be value. It might be good, it might be bad, it is simply that it depends on so much that nobody can know; interest rates, commodity prices and what happens to the economy economy. Some will do very good, some will go bust, that is the nature of the business. As always, I don’t have to be invested in everything and although interesting, I am not going to become a specialist in real estate developers for now as here or there they usually go bust, think about Trump.

Let’s find businesses where the probability of going bust or not growing is minimal no matter what happens. Please subscribe to my newsletter to get a by-weekly overview of the content produced, both on YouTube and on this blog.

A final note – why is the above research so important if I am not going to buy this? Well, investing knowledge compounds, and this is probably the best lesson I’ve learned since becoming a full-time stock market researcher in 2018. I might not invest now in this, but in 2027, there might be something connected to this that will give me a good connecting point to something else or this. Therefore, investment is a game of learning, as would Jonathan Seagull say: my race to learn has just begun.